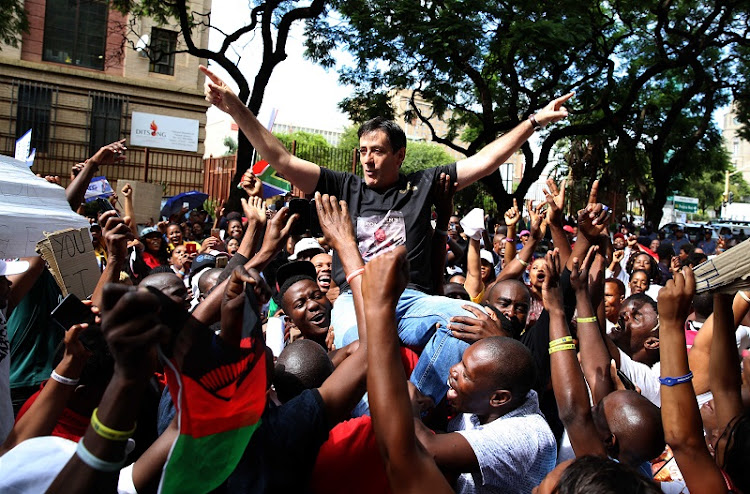 Supporters of self-proclaimed prophet Shepherd Bushiri came out in numbers to support him as he faced charges of fraud and money laundering in Pretoria.
Image: Thapelo Morebudi/The Sunday Times

From Soweto‚ Limpopo and New York‚ hundreds of "faithful" flocked to Pretoria's specialised commercial court on Wednesday to pledge their support for the self-proclaimed prophet Shepherd Bushiri - who they claim saved their lives.

"I used to be a drunkard mother who could not even take care of her children. Life was really tough for me and no one could help me … I wanted kill myself … but my papa saved me‚" Rosina Vuma of Soweto said of Bushiri.

Vuma‚ who was at the court by 5am‚ said her life had changed for the better after joining the Enlightened Christian Gathering in 2010.

"Papa changed my life‚ I can now take care of my kids like a normal mother does‚ even at night I sleep peacefully‚" she told our sister publication, TimesLIVE.

Followers of self-proclaimed prophet Shepherd Bushiri pledged their support outside the Pretoria Specialised Commercial Crimes Court on Wednesday February 6 2019. Bushiri and his wife Mary were released on R100,000 bail each after being arrested on fraud and money laundering charges.

Bushiri and his wife Mary stand accused of fraud and money laundering. One of the church elders‚ Zenele Khoza‚ said she believed that her "parents" were innocent and she would always stand by them.

"They did nothing wrong. They must release father. We love our father‚ I can die for my father …" she said.

The Bushiri couple were freed on bail of R100‚000 each shortly afterwards. They had been in custody since their arrest by the Hawks on Friday.

Khoza said she joined the church in 2000 after suffering from a life-threatening disease and was healed by "the prophet".

Joseph Ndou of Musina‚ Limpopo‚ was among those were at court by 6am. "I was really uncomfortable with the fact that a man of God had been arrested."

Ndou said he previously did a lot of bad things but was saved. "My father saved me. Life was really bad for me but Papa changed all of that‚" he said.

Ndou was one of those who threatened not to participate in the general elections if charges against Bushiri were not dropped.

Scores of people carried placards containing messages of solidarity. "No Major 1 No vote"‚ “Major is here to save South Africa"‚ “Leave Major 1 alone"‚ "Only Major 1 can unlock my vote‚" some of the placards read.

Meanwhile‚ a New Yorker‚ Sheila Akwawa‚ who was diagnosed with depression‚ said "the prophet" and his wife Mary prayed for her and she was healed completely.

"Being here is more than standing in solidarity; we need him to pray for people like me suffering from suicide and depression …" Akwawa said.

She viewed the charges against Bushiri as "a xenophobia attack".

The Hawks on Monday afternoon slammed claims that they had a personal vendetta against church leader Shepherd Bushiri.
News
2 years ago

The two are originally from Malawi but are permanent residents in SA‚ renting a house in Midrand‚ the court heard on Wednesday.

They are professing their innocence on the charges relating to money laundering‚ organised crime and fraud.

On hearing the pair had been released on bail‚ congregants dressed in the church’s t-shirts‚ adorned with Bushiri’s face‚ rejoiced with loud screams‚ prayers and tears‚ some speaking in tongues and dancing. Their supporters span the political spectrum‚ with a number of people dressed in ANC‚ EFF and BLF regalia.

Bushiri shared his appreciation of the support on his social media accounts after the court hearing.

"Thank you so much for your love and support‚ and for the prayers‚" Bushiri posted. "Prophetess Mary and I are overwhelmed and grateful."

The duo will return to court on May 10.