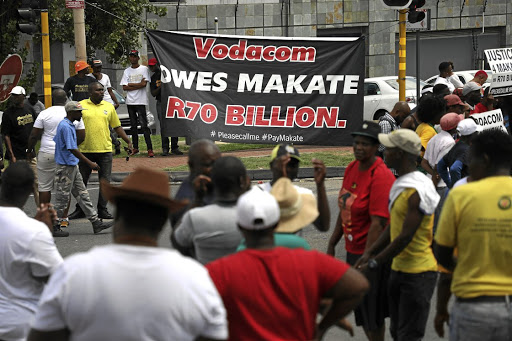 Scores of supporters of the #pleasecallme movement held a protest at the entrance to Vodacom headquarters in Midrand yesterday in support of Nkosana Makate.
Image: Thulani Mbele

A major shutdown of Vodacom outlets across the country is on the cards after the mobile network giant failed to reopen negotiations with Nkosana Makate yesterday.

The #pleasecallme movement threatened the shutdown yesterday outside the company's Vodaworld headquarters in Midrand.

Armed police stood guard at the main entrance of the building amid singing by protesters. The campaign's committee member, Benson Motsumi, said leaders would meet to plan for a shutdown of all Vodacom outlets.

Motsumi said in the meantime they would continue with the call for people to boycott Vodacom products.

Members of the #pleasecallme movement have vowed to unleash their wrath on Vodacom.
News
3 years ago

He said they would also ask people to port their Vodacom numbers to rival networks.

"We are going to plan a proper shutdown wherein we will also be handing over a memorandum of demands. In that memorandum we will be asking the same thing we are asking now, that Makate be paid what belongs to him," Motsumi said.

Modise Seotaba said they would intensify action against Vodacom after the company failed to meet the set deadline.

Nkosana Makate will head back to court as he wages a fresh legal battle against cellphone giant Vodacom.
News
3 years ago

"Instead, we are met by police who are here to protect private property."

Black First Land First members could also been seen demonstrating outside the Sandton City entrance in support of Makate while the Vodacom store inside the shopping mall had been closed. On Wednesday, Makate told Sowetan that he would challenge the compensation amount decided upon by Vodacom CEO Shameel Joosub in court because it was ridiculously low.

Joosub had made a decision in accordance with a Constitutional Court instruction that the company CEO must determine a fair compensation amount should the parties fail to reach an agreement.

Both Vodacom and Makate cannot disclose the amount because they are bound by confidentiality. However, Makate's former litigation funder Chris Schoeman said in an interview on Radio 702 that Vodacom had made a R49m offer.

Schoeman said he did not believe Makate invented the please call me idea even though he had funded his case.

Former MTN consultant Ari Kahn, who has also claimed to be the inventor of the technology, was also interviewed and said Makate is not entitled to a single cent as he does not have intellectual property rights.

Kahn said he invented the please call me when he was contracted to MTN and it was later appropriated by Vodacom.

Cellphone giant Vodacom could have handled its differences with Gauteng education MEC Panyaza Lesufi much better.
Opinion
3 years ago

Lawyers for Vodacom have served Gauteng education MEC Panyaza Lesufi with a cease-and-desist document.
News
3 years ago
Next Article