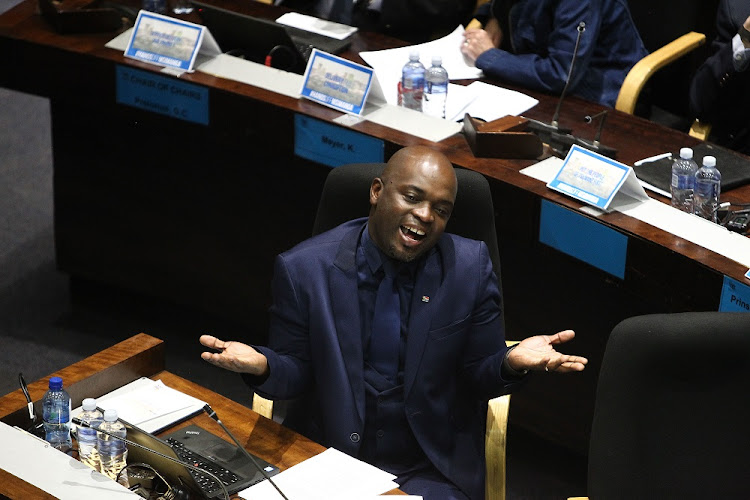 Outgoing Tshwane mayor Solly Msimanga has survived a third motion of no confidence brought against him by the opposition ANC.

Msimanga survived after council speaker Katlego Mathebe disallowed a session to vote on the motion to remove the mayor in the Tshwane council late last night.

After hours of exchanging racial slurs, derogatory words and throwing water bottles across the floor towards Msimanga, the mayor was saved by Mathebe, prompting opposition parties to cause an uproar.

"This motion is disallowed and also it is impractical because, at the end of the day, he is vacating office. If you are not happy with my ruling, you know what to do in terms of section 40," the speaker said.

ANC, EFF call for Msimanga to vacate office immediately, not in two weeks

The EFF and ANC have called for Tshwane executive mayor Solly Msimanga to vacate office on Thursday.
News
2 years ago

Her remarks follow Msimanga officially tendering his resignation to the speaker yesterday. It will come into effect on February 11.

Immediately after Mathebe ruled against allowing the council to vote for Msimanga's axing, the DA caucus repeatedly chanted "Go to court" to the ANC after they were unhappy with the decision.

But the ANC caucus said there was no connection between the mayor's resignation letter and the motion, and that they would not leave until the motion went ahead.

He said removing Msimanga would be in the best interest of the people of Tshwane.

When Mathebe kept disallowing the vote to go ahead, EFF councillor Obakeng Ramabodu requested that she recuse herself from her duties and let her deputy take over.

"Maybe you need to leave that chair and allow the deputy to take over and proceed with the motion. But also, as the EFF, we feel that this matter must be subjected to a vote," Ramabodu said.

However, Mathebe stood her ground.

After the ruling, a jubilant Msimanga spent the rest of the council session with his arms crossed. Msimanga is being accused of corruption and maladministration.

The ANC, which lost control of Tshwane in 2016, had not returned to the council chambers at the time of going to print last night, despite asking the speaker for a 30-minute caucus.

Meanwhile, municipal manager Moeketsi Mosola's matter had also not been tabled at the time of going to print.

Mosola's matter was on the agenda after the auditor-general found that the city's R1.2bn contract with engineering company Glad Africa was awarded irregularly. The controversial contract has been at the centre of a fallout between Mosola and Msimanga. The latter tried to suspend Mosola for his role in the awarding of the tender.