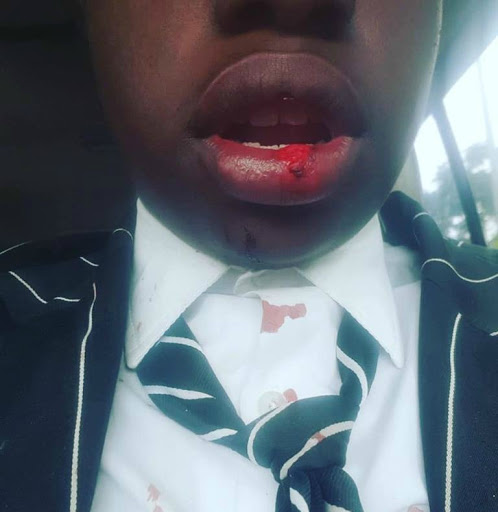 Pupils have been suspend after an alleged bullying incident at Selborne College on January 25 2019.
Image: Facebook/Samkelo Ngwenya

A group of boys has been suspended after an alleged bullying incident at Selborne College in East London‚ in the Eastern Cape.

Provincial education MEC Mlungisi Mvoko noted “with shame the spate of violence” in the province‚ including the incident at Selborne College.

“These unfortunate incidents in certain areas have led to burning down of schools by learners‚ while in Selborne‚ a learner was left with severe injuries on his face‚” Mvoko said on Sunday.

“All learners involved in the Selborne College incident will be placed on precautionary suspension with immediate effect. The suspension is not a pronouncement on the guilt... of anybody‚ but is aimed at serving as a ‘cooling-off period’ and to allow the department and the school to conduct and complete their investigations.”

When I contacted the school on Friday, the perpetrators were in class enjoying a great learning environment whilst my nephew was in hospital being treated for pain and injuries. That cannot be right under any circumstances

A group of learners allegedly beat up a 15-year-old boy on the school grounds on Friday. An image of his bloody mouth and shirt was shared on social media by Buffalo City Metro spokesperson Samkelo Ngwenya.

Mvoko said the department may take further disciplinary steps once an investigation into the incident was wrapped up.

“Since this is a very serious matter‚ the department had activated all programmes geared towards educating learners about violence. This will assist in creating an understanding (for) the learners that violence does not solve any issues.”

Selborne has up until on Monday to tell me what they are going to do about this @Lesufi this racism in our schools is unacceptable pic.twitter.com/v4k8sqcXEU

Mvoko asked the public to help the department by reporting incidents and expressed concern at how such incidents were depicted on social media.

“Some very unfortunate statements have been made which do not assist with resolving the issue.”

ALL JOURNALISTS/EDITORS FOR IMMEDIATE RELEASE Dated: 27 JANUARY 2019 MEC MVOKO APPALLED BY SCHOOL VIOLENCE IN SOME EC...

Selborne College spokesperson Jeff Fetting confirmed on Friday that the school was investigating the incident.