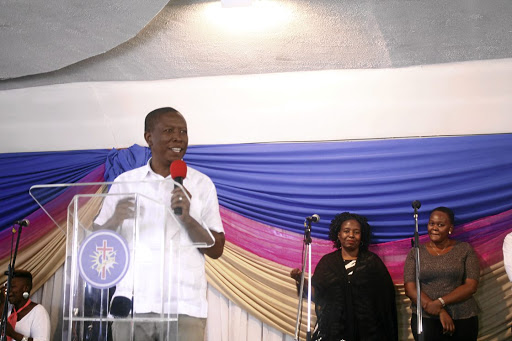 Julius Malema addresses congregants at the Apostolic Faith Mission in Soshanguve on the need for violence-free elections.
Image: KABELO MOKOENA

EFF leader Julius Malema has appealed to church leaders to pray for the upcoming elections to run smoothly.

Speaking to the congregation at the Apostolic Faith Mission River of Life in Soshanguve, north of Pretoria, yesterday, Malema said there should not be any loss of life in the run-up to the elections.

"We came to church to ask for blessings because we think it is the right thing to do.

"We asked the church to pray for peaceful elections and that there shouldn't be a drop of blood because of the elections.

"People have the right to choose the government of their choice without any form of intimidation," Malema said.

The community of Dludluma in Mpumalanga prevented officials from the IEC from conducting voter registrations at the weekend.
News
2 years ago

South Africans are expected to go to the polls in May, as the month has previously been chosen for elections.

Accompanied by party spokesperson Mbuyiseni Ndlozi and Gauteng chairperson Mandisa Mashego, Malema said he was confident the EFF would be the "government tomorrow" because it has been "scientifically proven" that the ANC and the DA were declining in terms of support.

Malema said due to the words of wisdom from the pastor who had called for forgiveness, he had forgiven former president Jacob Zuma.

"We came here for wisdom and since the pastor was telling us about forgiveness as politicians, we must now forgive Zuma.

"We forgive him for the sake of the pastor because we cannot go against the word of the priest," said Malema.

"I was saying to the pastor, we have forgiven Zuma because of the sermon, so Zuma must thank the pastor because we got wisdom from the pastor."

The Electoral Commission called on eligible voters to register and update their address details on Sunday - the final day of registration.
News
2 years ago

The red berets leader and Zuma's relationship soured after he was expelled from the ANC Youth League in 2012.

Zuma and Malema have also exchanged political blows in parliament, with the red berets MPs asking him to pay "back the money".

This was after former public protector Thuli Madonsela's report showed that Zuma had derived undue benefits from security upgrades to his Nkandla homestead.

Malema and his MPs have previously refused to address Zuma as "president" in parliament, but rather mockingly preferred to address him as "baba kaDuduzane".

The EFF is expected to hosts its manifesto launch rally at Soshanguve's Giant Stadiumon Saturday.