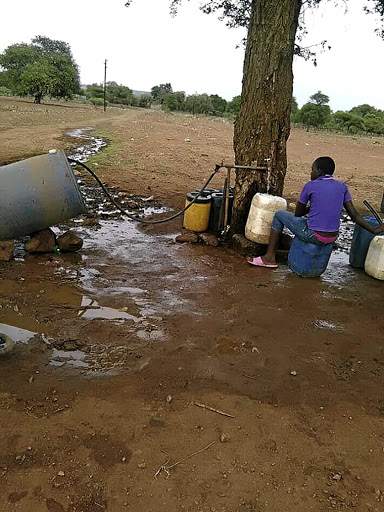 A Dludluma resident at a communal tap. Residents blocked the IEC from voter registration at the weekend due to a lack of service delivery.
Image: Mandla Khoza

The community of Dludluma in Mpumalanga prevented officials from the Independent Electoral Commission (IEC) from conducting voter registrations at the weekend.

The community also blocked political parties from campaigning, saying they don't want to participate in a democracy that does not work for them.

"Deputy President David Mabuza lied to us when he was premier, promising us water and roads but since 2017 we don't have that so we cannot allow ourselves to be fooled," said community member Sizwe Shongwe.

He said all they needed was water and better roads before they could allow voting to take place in the area, which is near the Mozambique border.

"As young people we are unemployed and during the elections we will deposit our CVs into ballot boxes. Maybe we will get to taste democracy," said Shongwe.

He told Sowetan they last had water in November and now they were forced to make alternative plans to get it somewhere else.

"As we speak, the whole community uses one borehole to get water or we go to dams, risking crocodiles, to fetch water. Now they must vote for themselves and enjoy their democracy, which is a pipe dream to us," he said.

Chairperson of the ANC in Ehlanzeni region Ngrayi Ngwenya was chased away when he tried to distribute T-shirts.

"They are fat, eating our monies so why come to us for votes? We don't want anyone here until we have water and roads," said Shongwe.

The Electoral Commission called on eligible voters to register and update their address details on Sunday - the final day of registration.
News
3 years ago

Spokesperson for the IEC in Mpumalanga, Sibusiso Nkosi, confirmed that their officials were prevented from working in the area at the weekend.

"We haven't worked there for the whole weekend. Our officials will submit a report and we will see how that impacted on the voter registration and a decision will be taken," Nkosi said.

He said IEC offices will still be open within all municipalities until the president announces the election date.

"So people can go and register there or check their names if they are on the voters' roll," said Nkosi.

Meanwhile, Nkosi said voter registration was restored in Leslie township in the Gert Sibande region after business people, including taxi owners, had earlier closed all voting stations in the area demanding to be taken seriously.

"What we can say to our people is that protesting is constitutional but such cannot be done when you have to step on other people's rights," said Nkosi.

Despite sporadic community protests at some voting stations and bad weather in some areas, voter registration is in full swing throughout South ...
News
3 years ago

IEC concerned about lack of young first-time voters in KZN

More than five million people in KwaZulu-Natal have registered to vote in the national elections, but the Independent Electoral Commission (IEC) is ...
News
3 years ago
Next Article