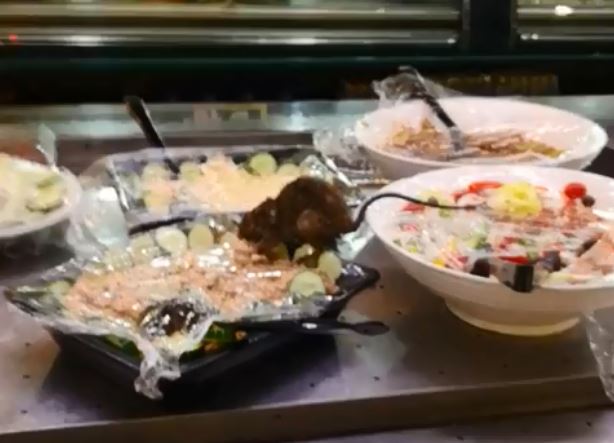 A rat is seen tearing into a salad at Food Lovers Market.
Image: Screenshot from video

Food Lover's Market, which recently made headlines after a rat was filmed tearing into a salad at its Diepkloof store, has suggested that the City of Johannesburg should also take responsibility for the incident.

"We and our franchisees have for years been fighting an ongoing battle to combat the presence of rodents around our stores and the premises they occupy. We have also employed outside pest control agencies that have taken all measures available to them, but the rodent problem has remained an ongoing issue," spokesperson Nigel Meintjes said in a statement.

"However, we feel it is important to note that the areas surrounding both stores in question – Diepkloof in particular – is in a disgusting state. This area has acted as an informal dumping site for years without any remedial action being taken by the City," he added.

"It would assist our cause greatly if the municipality were to clean up the area as the lack of rubbish removal most certainly acts as a fertile breeding ground for rodents and the like. Residents of these areas deserve no less."

The practice of food retailers leaving food uncovered in their displays is widespread‚ but unacceptable‚ says a food science consultant with more ...
News
3 years ago

Meintjes was responding after the City of Johannesburg's MMC for health Mpho Phalatse's shut down another of their outlets in Soweto last week. Phalatse said the outlet in Jabulani would remain closed to allow for fumigation and deep cleaning.

"Our environmental health inspectors in the region said they noted that the store did not comply with a number of food safety regulations and that remedial actions were recommended," Phalatse said.

She said the Jabulani outlet had been issued with notices to comply with waste management, pest control and hygiene requirements long before the Diepkloof video went viral on social media.

Meintjes acknowledged this. He said, prior to Phalatse's action, the company had taken the necessary steps to address food safety in their stores.

Earlier this month, Food Lover's Market said it was investigating a rodent problem after a video of a rat eating fresh food at one of its stores surfaced on social media.

The Diepkloof store video, posted on Facebook by Sipho Ndhlovu, showed the rat eating food that had been on display in the store's fresh food section.

A few seconds later, an employee is seen taking away the bowl of food, with the rat on top. Responding to that incident, the company said it took the matter very seriously.

"We view the matter in a serious light and have launched an investigation to establish the source of the rodent problem. In the meanwhile, we can say we have a health and safety inspectorate that does regular investigation and the last inspection took place in November," the statement read.

The company said the store had contracted pest controllers Rentokil, which did regular inspections and provided the necessary services regarding rodent and pest control.

The company had said it would reopen doors in its Jabulani and Diepkloof store within a few days but it was not immediately clear whether this had since happened.