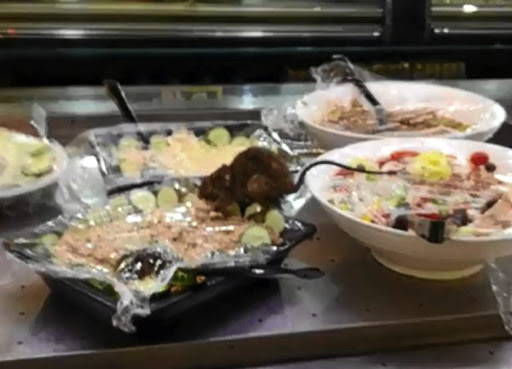 A rat is seen tearing into a salad at Food Lovers Market in Diepkloof.
Image: Screenshot from video

A second Food Lovers Market outlet in Soweto has been closed temporarily due to poor food hygiene standards.

Last week, the Food Lovers Market outlet at Diepkloof Square was closed after a video of a rat hopping around the salad display area went viral on social media, resulting in public outrage.

Yesterday, Phalatse said the store in Diepkloof would remain closed until they were satisfied that all health standards are complied with.

Phalatse said the outlet at Jabulani would remain closed to allow for fumigation and deep cleaning.

"Our environmental health inspectors in the region said they noted that the store
did not comply with a number of food safety regulations and that remedial actions were recommended," Phalatse said.

She said the Jabulani outlet had been issued with notices to comply with waste management, pest control and hygiene requirements long before the video went viral on social media.

Food Lover's Market management is investigating a rodent problem after a video of a rat eating 'fresh food' at one of its stores surfaced on social ...
News
2 years ago

"Anyone operating a food outlet in the City of Johannesburg must adhere to food safety regulations.

"This is not negotiable," she said.

"However, we feel it is important to note that the areas surrounding both stores in question - Diepkloof in particular - are in a disgusting state," Meintjes said.

"This area has acted as an informal dumping site for years without any remedial action being taken by the City."

Meintjes said there was a lack of rubbish removal in the area which created a breeding ground for rodents and also affected residents.

Meintjes said the franchisees had been fighting for years to combat rodents around their stores and the premises they occupy.

"We have also employed outside pet control agencies that have taken all measures available to them, but the rodent problem has remained an ongoing issue," Meintjes said.