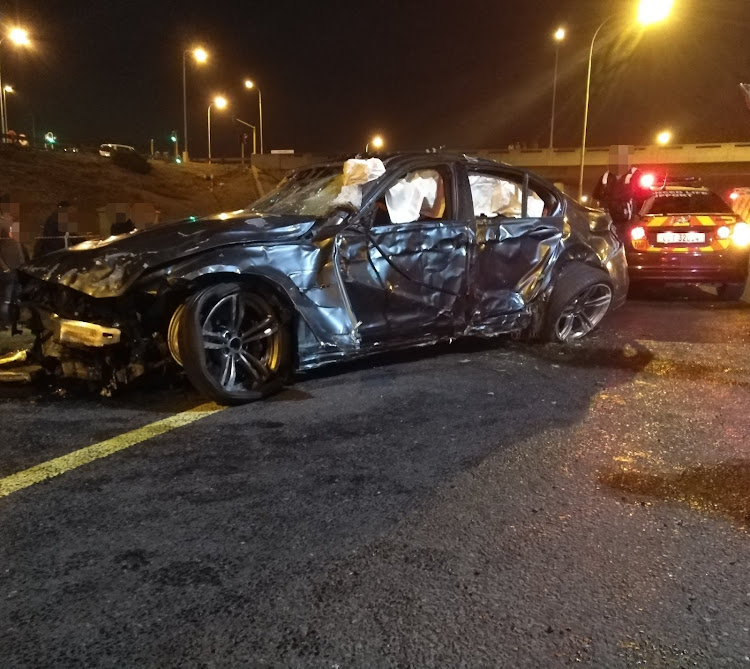 A car crashing on a Cape Town highway at high speed was caught on camera.
Image: TWITTER/@LimaCharlie1

A video of a car crash in what looks like a street race has surfaced on social media.

One of the videos was filmed from a bridge, where a group of people were watching cars approaching on the N1 in Cape Town, near the Sable Road turnoff.

Life Healthcare response car LimaCharlie1 tweeted: “According to EMS reports, the car overturned after the crash on the N1 in Cape Town near the Sable road turn-off.”

The City of Cape Town said on Monday it is “appalled” by the illegal street racing filmed on Sunday.

“We can confirm that the incident did in fact happen just after midnight this morning, leaving the driver of the BMW seriously injured,” City of Cape Town safety and security mayoral committee member JP Smith said.

“The incident is just the latest example of the devastation wrought by illegal street racers on our streets.”

Smith said “fortunately” no one else was injured.

“There have been plenty of cases before where innocent persons have paid with their lives because of the recklessness and arrogance of others.”

Smith said only the police can prosecute motorists using third-party evidence such as the video.

“The city has engaged with the National Prosecuting Authority about this matter and they have informed us that they are not legally able to open cases or issue notices based on statements from members of the public and that only police may investigate such cases when a member of the public submits a complaint.”

“The driver refused to stop and, to the officer’s amazement, swapped seats with his passenger in mid-pursuit. Only then did the vehicle pull over.

“The original driver was arrested on charges of reckless and negligent driving and drunk driving.”

Both were charged with defeating the ends of justice.