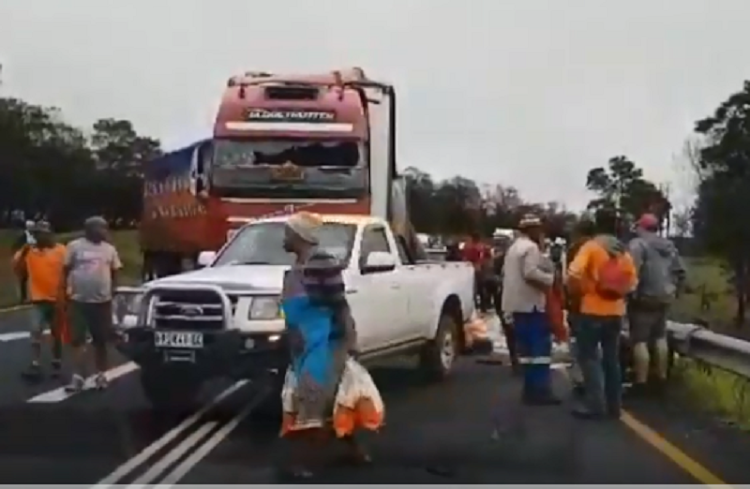 Motorists helped themselves to food products from a truck that overturned on the N6 between Cathcart and Stutterheim on Thursday morning.
Image: Supplied/BHONGO JACOB

Motorists helped themselves to food from a truck that overturned on the N6 between Cathcart and Stutterheim in the Eastern Cape on Thursday morning.

Transport spokesperson Unathi Binqose said traffic had been partially affected. “Motorists are going for what is in the truck. Traffic flow has been hindered but it’s not completely closed‚” said Binqose.

A motorist at the scene‚ Richard Judge‚ said police were seen loitering while a crowd looted food items from the truck.

“The police were at the scene and the public were cleaning out the truck. They even allowed a bakkie to reverse against the flow of traffic to load items into the car. I asked the police why they weren’t doing anything and they said there is nothing they can do.”

In a video sent to SowetanLIVE‚ motorists can be seen carrying big bags of mealie-meal‚ samp and rice while police look on and walk away.

“Police attended an accident about 6am on the N6 and when they arrived a crowd was taking groceries from the truck. Backup was called to assist.”

When asked why the police did not do anything to stop the crowd‚ Mawisa said “members who went to the scene were under the impression that they were attending a normal accident and on their arrival they found a crowd of community members looting from the truck. They tried to stop them but it was impossible as the crowd was all over the scene and they called for backup to assist.”