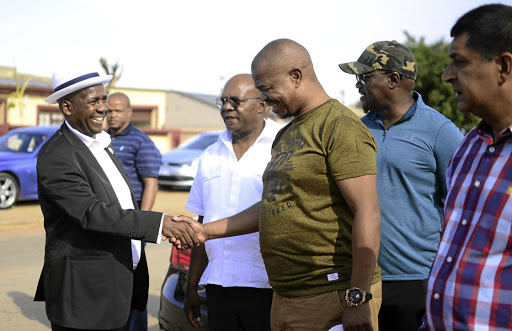 A friend of the late former Bafana Bafana legend Phil "Chippa" Masinga says it is sad that people forget about the good that he did while still alive but remember every bad decision he made in life.

Chippa's friend Skake Thamae said Masinga was an artistic player. "Chippa", as he was affectionately known in soccer circles, died on Sunday at a Johannesburg hospital after suffering from cancer.

Thamae met him when he was only 16 years.

At the time, Chippa and his brother Shakes Masinga were staying at Buffelsfontein mine in Stilfontein but attended school in Khuma township where Thamae was staying.

He said that was where their friendship started. "We recruited him to come and join our team Rovers at the township. Skinny and nimble-footed as he was, Chippa was an artful player, a complete striker. He was scoring goals like it was out of fashion."

Thamae said Chippa ended up joining Rover's first team before him because he was more skillful.

A despondent Phil Masinga once attempted to walk away from Bafana Bafana following a torrent of abuse he suffered from intolerant fans.
Sport
2 years ago

He was later recruited by another local team Flamingo before joining Jomo Cosmos.

Thamae said Jomo Sono "discovered" Chippa at Flamingo. After playing for Cosmos he joined Mamelodi Sundowns which later sold him to Leeds United in England.

Thamae recalls Masinga's playing days ahead of 1998 World Cup in France, when Chippa was a key player for both Bafana Bafana and Bari in Serie A in Italy.

"[I remember one time] he came to play for Bafana Bafana and immediately after the match, officials at Bari hired a private jet to take him back to Italy."

Thamae said it showed that Chippa was a very important player both at home as well as at club level internationally.

He said after Chippa retired from football they thought a player of his calibre and experience would be utilised here at home.

"Unfortunately, the opposite happened until his death," Thamae said, saying the country failed to utilise Chippa's experience for the development of those who came after him.

He said since Stilfontein descended into depression, Chippa had been trying hard in development efforts in the area so that there could be life after the mines.