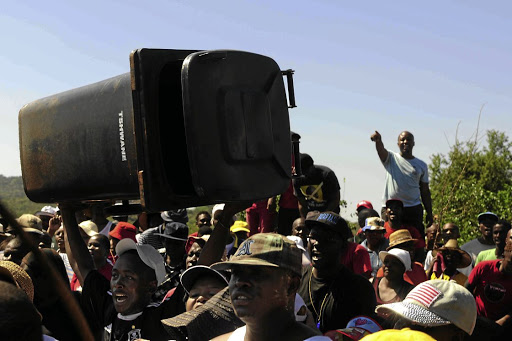 Protesting residents in Ga-Rankuwa, north of Pretoria, throw a dustbin into the City of Tshwane premises.
Image: Thulani Mbele

This is according to the 5th Quality of Life Survey results for 2017/2018 that were published yesterday. The survey is conducted every two years to track perceptions and mega trends on social, economic and governance issues across Gauteng. The results also showed that crime is of most concern followed by unemployment and drug abuse.

The Gauteng City Region Observatory (GCRO), a collaboration between University of Johannesburg, Wits University and Gauteng province officially launched the survey yesterday. About 24889 respondents were interviewed across the province.

Employees at one of the financially struggling municipality in North West have been told not to come to work after they were intimidated by aggrieved ...
News
3 years ago

GCRO executive director Rob Moore said 44% of residents were satisfied with the provincial government compared to 39% in the 2015/2016 survey. "Despite continued high levels of population and household growth in Gauteng, the survey shows that levels of access to services have remained stable.

"Access to piped water to homes and yards has remained above 90% over the decade that the survey has been conducted," Moore said.

Major cities like Ekurhuleni are doing well, while Emfuleni has seen significant declines in refuse collection.

"Ekurhuleni is outperforming other metros on most service measures. However, the province as a whole has seen big declines in residents' satisfaction with cost of services and billing in Johannesburg and Tshwane," Moore said.

The quality of life remains lowest for African respondents and is not catching up.

Access to basic services remains high but there are challenges with refuse removal and reliable provision of water.

Mashaba blamed for range of ills as ANC marches through Jozi

About 3‚000 jovial ANC supporters in party T-shirts marched peacefully through Johannesburg’s centre on Friday to demand the “speedy” delivery of ...
News
3 years ago

Gauteng premier David Makhura said he was concerned by the trend that shows service delivery decline and regression in the four municipalities. "These struggling municipalities need our support and I hope that they will not just dismiss this report."

Tshwane spokesperson Selby Bokaba said the city takes the feedback from communities very seriously and that it was very useful to guide them in planning their activities.

"The feedback will be used for improving service delivery and addressing community concerns. Communities are the ultimate employers of the city as represented by their public representatives."