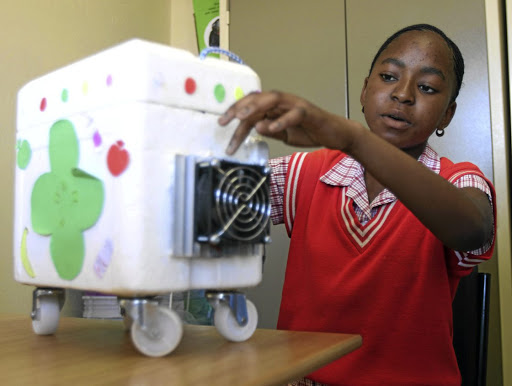 Tumelo Ramokone of Mapudithomo Primary at Nobody village, Limpopo, used the internet to research her solar cooler box. / ANTONIO MUCHAVE

Curiosity for technology has earned a 13-year-old Limpopo grade 7 pupil a top spot in the country for creating her own solar cooler box.

The learner Tumelo Ramokone, who attends Mapudithomo Primary School in Nobody village, GaMothiba, was voted the best young female scientist during an Eskom Expo in Boksburg, Ekurhuleni, last month.

Eskom Expo for Young Scientists is a science fair where students get a chance to show case their groundbreaking projects based on their own scientific investigations. By participating at the expo learners increase their awareness of the wonders of science, add to their knowledge and broaden their scientific horizons, the power provider said.

Tumelo said she was voted the best after she showcased her solar-powered cooler box for food, drinks and medicine.

Snikiwe Xaba is the proud owner of her own skin care range, Natural Me.
News
3 years ago

"It also charges cellphones. In 2016, we took a family trip to Mpumalanga; we needed cold water after our ice had melted in the ordinary cooler box.

"At the time we were very far from the shops to get ice. We had no choice but to drive to the shops. It was at the time I thought about creating the solar-powered cooler box because it would have saved us time," she said.

However, Tumelo said had it not been for her twin sister Kgaugelo, she wouldn't have won the prestigious award.

"After my teacher told us about the expo I wanted to create a solar-powered umbrella but she (twin sister) convinced me to follow my long thought project. Kgaugelo is into arts but she really helped and encouraged me in completing my project. She would be searching information on the internet while I tried to assemble the parts," she said.

Tumelo prides herself on her achievement. The cooler box can keep drinks cool for a day when fully charged.

"I'm happy I can't believe I went this far. It took me two weeks to complete this project but had it not been for one scarce part I would have finished in a week. I had to order parts called 'peltier and heat sink' from America on the internet and it came through Pretoria then Polokwane. And thanks to my parents for financing my project and teachers for motivating me," she said.

A teenage girl who had acne and could not afford to buy creams to treat it, is now the proud owner of her own skin care range.
Business
3 years ago

Tumelo won herself a laptop, R500 and a gold medal.

She said she hoped to start a business dealing in the product before completing matric.

Despite her technological skills Tumelo wants to pursue her dream career and become an orthopaedic surgeon. But she will always love technology, she said.

Her mentor and teacher Matsatsi Dunkuru described Tumelo as a hard-working, disciplined pupil.

Maggie Ramokone, Tumelo's mother, said she and her husband spent R2500 to help her with the project. "We are very proud of this young girl."

Annually, at the expo selected students from 35 Expo Regions in SA compete against the best young scientists from the continent and the world