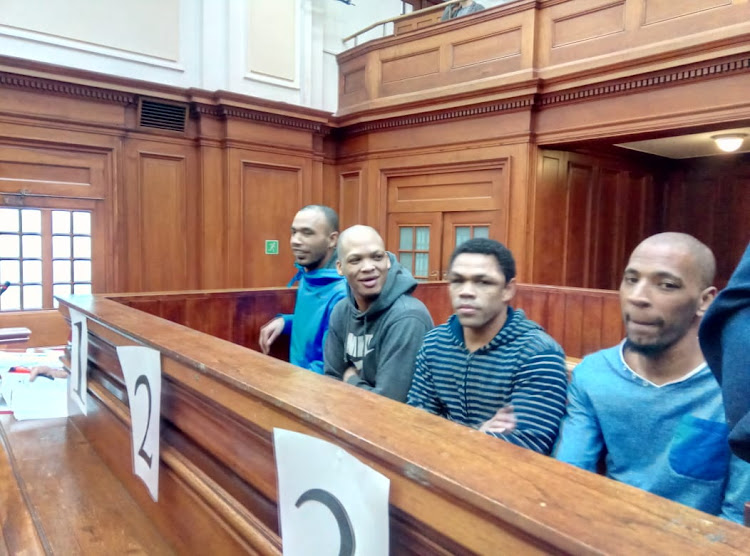 The men accused of raping and murdering Hannah Cornelius put hands over their gaping mouths as the meaning of their tattoos was described in the high court in Cape Town.
Image: Aron Hyman

Last week Geraldo Parsons was looking forward to going home to his “wife” and six-year-old daughter.

Parsons‚ one of four defendants on trial in the high court in Cape Town for the robbery‚ abduction‚ rape and murder of Hannah Cornelius‚ was convinced that he was going to be acquitted.

“I’m looking forward to going home. I don’t like being inside‚” he told SowetanLIVE with a smile as he stood in the dock of court 3 alongside Vernon Witbooi‚ Eben van Niekerk and Nashville Julius.

But on Wednesday‚ Parsons admitted his guilt on all 10 charges against him.

The man who has been portrayed as the ringleader of the gang accused of kidnapping‚ raping and murdering Hannah Cornelius is due to give evidence in ...
News
3 years ago

He laughed during fellow accused Eben van Niekerk’s testimony on Tuesday. But his chuckles turned to tears on Wednesday when he admitted “sexing” Hannah Cornelius on May 27 and claimed he did not want to do it.

After 12 days of witness testimony‚ including the gut-wrenching and emotional account of Hannah’s friend from Stellenbosch University‚ Cheslin Marsh‚ state prosecutor advocate Lenro Badenhorst drew out Parsons’ confession as though he was performing an exorcism.

“Let’s not play these silly games here Mr Parsons‚” he said. “You went to town that night in order to cause trouble. Your intention was to rob people. Am I right?”

“That’s correct‚” said Parsons‚ who had previously claimed he went into Stellenbosch from his Cloetesville home to withdraw money from an ATM.

During his testimony‚ Parsons tried to deflect all the blame for what happened to Marsh and Cornelius‚ and attempted to convince Judge Rosheni Allie that Cornelius had given permission for himself‚ Vernon Witbooi and Van Niekerk to have sex with her.

“All the people who came here to testify and give evidence against you‚ why did you put them through all of this? Why didn’t you plead guilty from the beginning?” said Badenhorst.

Parsons replied: “On that moment I didn’t want to plead guilty because the court didn’t find me guilty yet. I was afraid that the other accused were going to pin everything on me.”

Chilling testimony from one of the men accused of murdering Hannah Cornelius ended with him admitting he is guilty of all 10 charges against him.
News
3 years ago

Badenhorst pointed to a dynamic which he said trumped societal norms‚ in terms of Parsons’ world view. He is a member of the 28s prison gang and has admitted holding the rank of “sergeant”.

He denied Badenhorst’s assertion that he was in fact a general and “called the shots” in prison among his fellow accused.

“You are the only one who talks‚ am I right?” said Badenhorst.”

“That’s not so‚” said Parsons.

The prosecutor pointed out that after the accused allegedly kidnapped Cornelius and Marsh in Stellenbosch‚ they took them to Jamestown a few kilometres away. There‚ Parsons opened the boot of Corneliu’s blue and white Citi Golf to show a fellow 28s member the person he had kidnapped.

“You did this as though the person was your prey‚” said Badenhorst.

Parsons said the prison gang meant nothing outside of prison.

When Marsh testified‚ the men in the dock stared him down as he wept with nearly every sentence. He told the court he was so traumatised by what had happened that he had to drop out of Stellenbosch University‚ where he was studying theology.

Cornelius was found with stab wounds in her neck and her head was crushed by a 37kg rock.