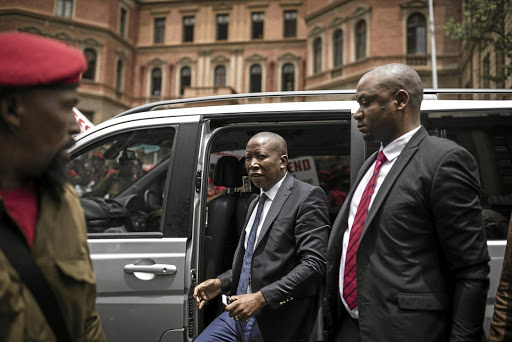 EFF leader Julius Malema's vehicle was allegedly pelted with rocks and beer bottles at his party's Gauteng people's assembly in the Vaal on Saturday.

Things got out of control at Assemblies of God conference centre in Henley-on-Klip in Meyerton on Saturday night when stun grenades and rubber bullets were fired to disperse a group of angry EFF members who accused Malema of sidelining their preferred candidate from being Gauteng chair.

The cause of the ugly confrontation was former University of Johannesburg branch leader Abednego Mathole.

Mathole told Sowetan last night that Malema told him he was not going to be nominated to contest for the position of provincial chairperson.

"He said I assaulted an SG [EFF secretary-general Godrich Gardee] and that was an automatic expulsion from the party," he said.

Mathole was challenging Mandisa Mashego for the position of provincial chair.

Mpho Mphahlele, an EFF member, also alleged in a post on Facebook that Malema's bodyguards had fired live rounds.

"Tonight we survived. We dodged bullets from Malema's military," he posted.

He said after Malema's speech his bodyguards got into a car. When they were leaving, some delegates started heckling Malema, calling him a sellout. Malema's car moved forward and made a U-turn.

"The security from the car comes out together with the CIC [commander-in-chief Malema]. Then they beat people up," Mphahlele said.

There was a gunshot and the crowd dispersed.

"Then comrades came back again and they threw bottles, they threw a lot of things. I don't know if there were stones."

Mphahlele said Malema's car left and a few minutes later a minibus with other bodyguards pulled up.

"They started beating us up. We started running away, but one thing that we saw is that they took another cadre. They took that person and went away with him to the venue entrance. They started shooting at us."

Another EFF member said it was members of a security company hired to protect the venue that used stun grenades and fired rubber bullets.

"I don't know if they broke anything in the commotion because it was late at night and I couldn't see," he said.

Police said no case was opened.

Malema and EFF spokesperson Mbuyiseni Ndlozi did not respond to requests for comment.