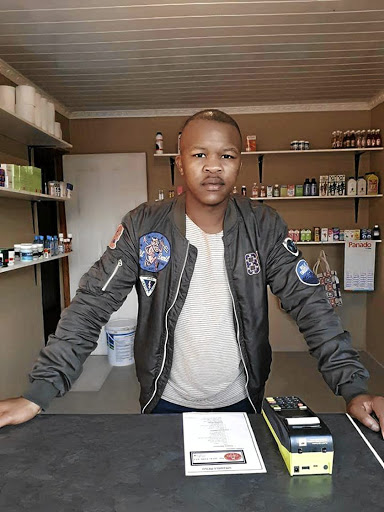 A 22-year-old Cape Town student has opened a pharmacy in his community after noting the struggle of the elderly to access their medications.

Thembekile Mahintso of Joe Slovo informal settlement in Milnerton saved up his food vouchers from his study funding to realise his dream.

Mahintso, a second year accounting student at Cape Town Peninsula University of Technology, managed to save R10000 from the first year. He used his family's garage to open Mangethe's Medi-Store in June, the first in his area.

"After seeing elderly people struggling to get medication and losing my father, I knew something had to be done," the entrepreneurial student said.

"Most of the people in our area could not afford the R48 taxi fare to and from town to get medicine. I did research on over-the-counter medicines which I buy from the same places as other pharmacies, but my prices are reasonable."

"I am not a doctor and I don't sell prescribed medicine but I provide the community with basic medicine that is also available at the big supermarkets across the country. I make sure that my mark-up percentage is less and I only charge my customers R10 to deliver their medicine."

He said ever since the death of his father things had not been the same at home because his mother Thandiwe, 45, was unemployed.

"Things are much better now because I am able to help buy groceries. I have started a WhatsApp group to connect with my customers. I also sell medicine on credit to people that I know."

Mahintso works with his mother, who comes in handy when he has to attend his lectures at the university.

A proud Thandiwe said about her son: "These days we see kids wasting their lives by abusing drugs when they are faced with poverty at home. I am happy that he came up with this idea and things are looking much better for us."

A client Phumza Mbona, 23, said: "They sell a lot of medication that is available at chemists but the advantage is that they are closer to the community. Before we would travel 15km to get basic medicines.