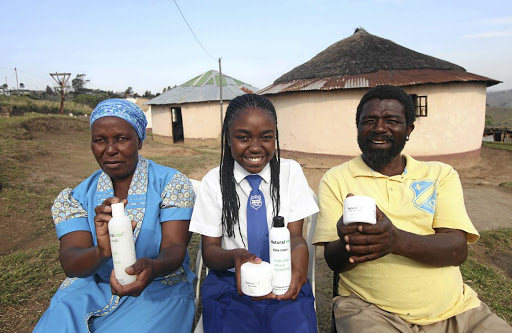 Snikiwe with her proud parents Weziwe and Jabulani Xaba at home in Nqabeni village, Izingolweni, on the lower south coast of KwaZulu-Natal.
Image: Thembinkosi Dwayisa

You can't let your circumstances define who you are. This may well be a cliché, but for 16-year-old Snikiwe Xaba, it has a ring of truth.

Last month this newspaper published Xaba's story of an acne condition that led her to conceptualise a roaring business to help others deal with the condition.

The teenager, who once had an acne problem and could not afford to buy creams to treat it, embarked on a process to research ways to treat acne.

She found a natural way to help alleviate her skin problem.

She is now the proud owner of her own skin care range, Natural Me, which consists of a face wash, toner, day and night cream, priced at R80 and R90. They are available via Twitter @NaturalMeCare.

"I spent most of my time on my phone looking for ideas to improve my business," Xaba said.

A teenage girl who had acne and could not afford to buy creams to treat it, is now the proud owner of her own skin care range.
Business
3 years ago

Born in the heart of Izingolweni, a small town 30km outside Port Shepstone in KwaZulu-Natal, Xaba was raised in Enqabeni village surrounded by rolling hills and lush vegetation.

The two rondavels she calls home bear testimony to her humble beginnings.

One of the rondavels is used as a kitchen, with the floor neatly plastered with cow dung.

In the middle area of the rondavel, there is a makeshift fireplace where the family prepares meals every day.

Even though Xaba is hailed as a hero by her villagers, to her parents she is still an ordinary young village girl who helps with the household chores, including fetching water from the river. Like most families in the area, Xaba's home has electricity, yet her parents still prefer using firewood to boil water.

At the crack of dawn, the teenager starts preparing a fire to boil water to make tea for her parents.

By 7am she is usually ready to walk a distance of 3km to her school, Sikanisweni High School, where she is in a grade 11 class.

"Every day I have to wake up early to help my mom with preparing breakfast before I go to school," she said.

"After school I look after my 13-year-old disabled sister, making sure she eats, and also cook supper for the family." 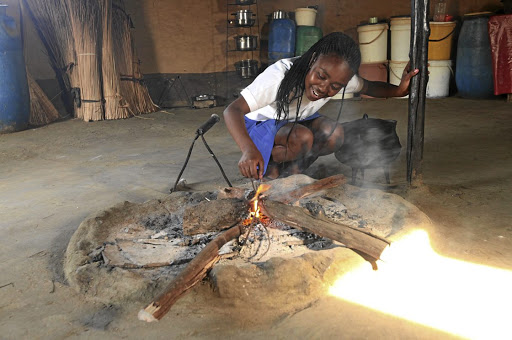 Snikiwe Xaba prepares the fire to warm her meal at home after school.
Image: Thembinkosi Dwayisa

Xaba's parents, Jabulani, 58, and Weziwe, 53, are proud of their daughter's achievements.

Her father said in the history of his family, no one has ever appeared in a newspaper or on television.

"I am glad that she did not let her background determine her future. Today we feel honoured to have the media visiting us in our home. I have always encouraged them [his children] to start their own businesses because of scarcity of employment," her father said.

For years Xabs's family survived on isijingi (pumpkin mixed with mealie meal) before going to bed. But since the teenager's business took off, things are looking up and the supper table appears scrumptious.

"I know she is not making much because the business is still new, however she needs to also save for her future," her father said.

"The only problem we have with her is that she is always on her phone. I always remind her not to neglect her school work because education is the key to greater opportunities."

Her mother said Xaba has from an early age been inquisitive .

"She was always helping me to sell sweets and snacks after school.

"I did not see anything wrong with that because her father and I are both unemployed. I have a matric certificate, but I had to look after her sister who started having fits," she said.

She said her condition of severe epilepsy was worsening.

"There was a time when I had to do people's laundry just to help put food on the table.

"Snikiwe's father collects old scrap metals, and has endured nasty comments from people who see him as a mad person who is collecting dirt. But that was his way to make sure the kids are clothed and have proper school uniform."

Xaba's childhood friend Zithobile Mavundla, 17, said when the teen first told her about her idea of treating acne with natural products last year, she did not think she was serious.

"I then realised that her skin was glowing. She showed me her facial products and I was excited for her," she said.

For now, Xaba focuses on her business on weekends when she is not at school.