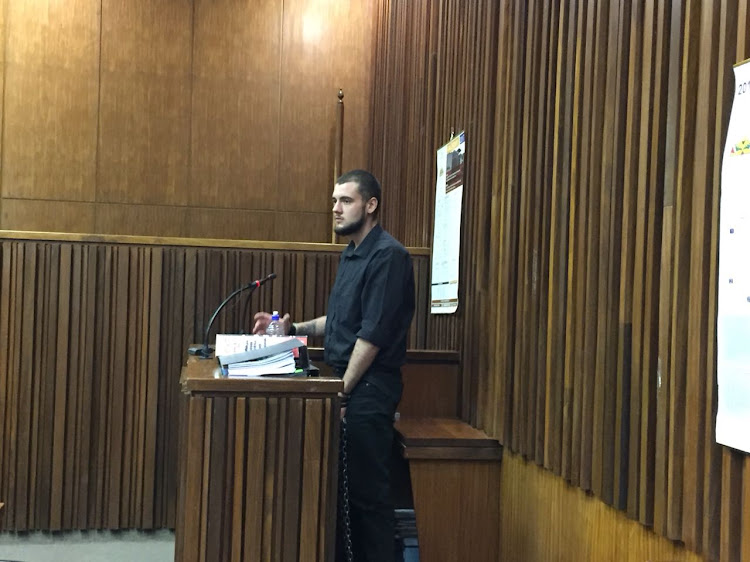 Pics of Le Roux Steyn who took the stand in the case of the Krugersdorp murders on Wednesday.
Image: Iavan Pijoos

Le Roux Steyn‚ who is a state witness in the case of the Krugersdorp murders‚ told the court that his mother was willing to die for him and the other accused.

Le Roux was being cross-examined in the trial of Cecilia Steyn‚ 37‚ Zak Valentine‚ 33‚ and Marcel Steyn‚ 20‚ who pleaded not guilty to 32 counts‚ including murder‚ robbery with aggravating circumstances‚ fraud and intimidation.

Ten years of his sentence were suspended on condition that he testifies in the trial.

Le Roux‚ clad in black jeans and black shirt‚ told the court on Thursday morning that to show his commitment to the 'ministry'‚ he had an image of a werewolf and bat tattooed on him.

"She [Cecilia] said she was the werewolf in the ministry‚ so I got the tattoo for her."

"I'm baffled - can a werewolf or a bat run a ministry?" Valentine's lawyer Amanda Nel asked.

"That is my question as well‚" Le Roux said.

The group 'laid low' for some time‚ but became more active in 2015 when they needed money.

A plan was put in place to murder Le Roux's father. He said that he had no relationship with his father.

Nel asked him why he decided to join the 'ministry'. Le Roux said he joined the group after he was made to believe by his mother that his father never loved him.

"She [Marinda] led me to believe that my father didn't want me and if I didn't do it their way I would be out on the street. I was still a child at the time."

He claimed that his mother signed fraudulent documents to change his surname without his father's permission.

However‚ after he turned 18 he starting rebuilding his relationship with his father. He told the court that they went on fishing trips and had built cupboards together.

Cecilia and his mother didn't approve of the relationship. "I was told that his demons are stuck to me and that I shouldn't see him. I stopped talking to him for a year."

Desperation for money kicked in and he was told by Cecilia to kill his father to claim his life policy.

"My father was allergic to bees so Cecilia said‚ when I go finishing with my father I should look for bees and throw it in his drink so that the bees can sting him."

Le Roux said they also planned to use syringes to inject him.

He said his mother told them if they did not succeed‚ they should kill her instead.

"So your mother was willing to die for you?" Nel asked.

However‚ the plan never materialised.