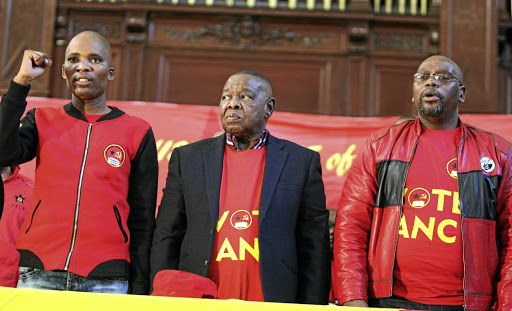 YCL secretary Mluleki Dlelanga is seen with Blade Nzimande and S'dumo Dlamini. He has reminded those leaking stories to the media that he still has the power to hire and fire party officials. / Antonio Muchave

Outgoing secretary of the Young Communist League (YCL) Mluleki Dlelanga is accused of flaunting the league's processes during provincial conferences so he could impose who got elected to lead the league in its December conference.

Dlelanga is over 40 years of age and cannot stand for another term.

Several sources who spoke to Sowetan on condition of anonymity said Dlelanga had no interest in following YCL constitution when constituting provincial conferences.

"There are a number of people in the national committee of the YCL who are utilised to go and launch branches without following the constitution to the effect that they put leadership they want from districts in order to strengthen their numbers," said a leader from Gauteng, noting that the YCL is in turmoil because Dlelanga uses gatekeeping to push his own agenda.

Another leader from Free State, who did not want to be named for fear of victimisation, accused the national secretary of imposing leadership that would be allowed to be delegates at the upcoming conference.

"In our view, these people are protecting their own personal wealth accumulation through our structures so they ensure that going to the national conference those who differ with them are not going to be delegates."

The leader said Dlelanga has only selected one district to head to the national conference without the knowledge of the provincial committee, while the four districts that differ with his views were excluded through flawed audit processes. "I have proof that our membership was manipulated and we didn't form part of the provincial conference."

He accused Dlelanga of appointing KwaZulu-Natal provincial secretary Sandile Dayi as the only official to oversee the provincial conference in June, adding they wrote to the SA Communist Party's (SACP) central executive committee to investigate the matter.

"Mlungisi is doing this because he wants to impose leadership on who must lead the YCL nationally and not according to people's wish."

Contacted for comment yesterday, Dlelanga rubbished the claims. "It's a desperate accusation by desperate people," he told Sowetan.

There is no way that I can prefer leaders when I'm leaving the office, I have no authority to undermine the wisdom of the YCL," Dlelanga told Sowetan.

Asked about the KwaZulu-Natal conference allegations, he burst out into laughter and further denied accusations.

He warned his accusers that he has the power to hire and fire them if they continued to "leak" stories to the media.

Dlelanga was elected in in 2014, taking over from Buti Manamela who held the post for 11 years.

Under Manamela, the YCL was more vibrant and resonated with the issues of the youth. Under Dlelanga, the YCL found itself fighting factional battles of SACP general secretary Blade Nzimande.