Not again! Cape Town's cry of despair as more trains are torched 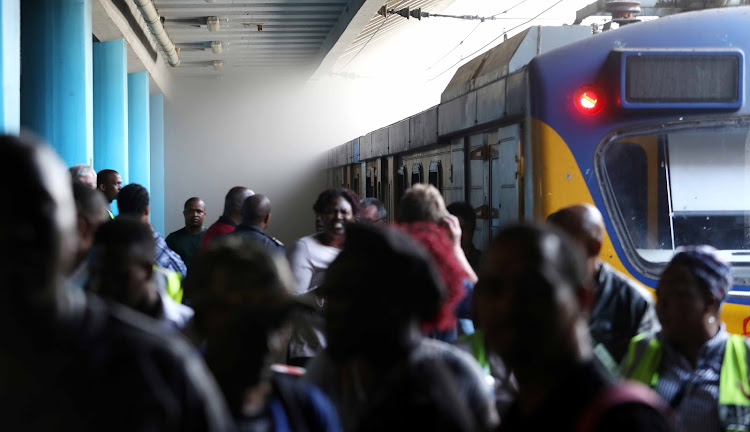 DA politicians gave a simultaneous cry of despair on Tuesday after two more trains were torched in Cape Town.

De Lille tweeted a video shot from her office at the Civic Centre showing black smoke pouring from the station below.

More trains unnecessarily going up in flames. This is economic sabotage. We can longer continue like this while the backbone of this City’s economy is destroyed, to the detriment of thousands of commuters pic.twitter.com/FGuqIzdx7i

“More trains unnecessarily going up in flames. This is economic sabotage. We can longer continue like this while the backbone of this city’s economy is destroyed‚ to the detriment of thousands of commuters‚” she said.

Plato‚ the Western Cape community safety MEC‚ said the repeated arson attacks on Cape Town’s commuter trains were intolerable. “We need answers from military intelligence‚ from police intelligence‚ I think the police owe us the answers‚” he said.

Speaking on the station concourse‚ Plato said the fact that attacks could repeatedly happen at the city's main rail hub showed that “our managerial systems are in tatters with regards to these issues”.

He added: “If rail transport collapses‚ a huge portion of our economy in the Western Cape will collapse.”

Herron said his calls on transport minister Blade Nzimande to declare a state of emergency concerning the sabotage and attacks on the passenger rail system had fallen on deaf ears.

“One must ask whether the minister is waiting for a complete collapse of our urban rail service before he will take action‚” he said. “We need minister Nzimande to act now. We need him to take extraordinary measures.

“Our urban rail system is operating at a fraction of the capacity it needs to service the demand. Over the past three years we have lost more than 140 carriages to fire.”

Tuesday’s fires started around 12.15pm as the Passenger Rail Agency of South Africa briefed MPs nearby about the torching of its trains.

Prasa CEO Sibusiso Sithole told parliament’s transport committee that it took three months for the company to refurbish one carriage.

The burning of trains had cost Prasa R636m over the last three years‚ Sithole said. The company planned to expand CCTV monitoring and was liaising with police‚ among other measures to combat the criminality.

“We have realised that whenever we visit certain areas‚ like in the Western Cape‚ there’s always a train that gets burnt just before our visit. So we are working with crime intelligence as to why this happens‚” Sithole was quoted as saying.