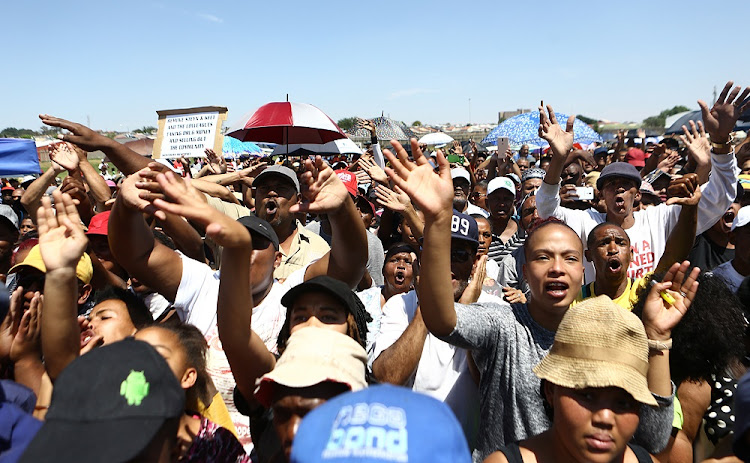 Westbury residents came out to listen to Minister Bheki Cele after the community clashed with the police on Monday resulting in people being arrested.
Image: Masi Losi

Enough is enough. That was the cry of a resident who is fed up with crime in Westbury‚ addressing a crowd gathered in the crime-ridden suburb of Johannesburg ahead of a visit by police minister Bheki Cele on Tuesday.

"We are here with tears in our eyes. It was the community that said enough is enough. No political party was involved in this. I salute you Westbury. You have done well‚" the woman said to loud cheers.

About 100 Westbury community members converged at a sports ground‚ waiting to be addressed by Cele who had earlier met with other stakeholders at the Sophiatown police station.

Bheki Cele to visit Westbury as residents' anger boils over

Police minister Bheki Cele plans to visit Westbury in Johannesburg on Tuesday in response to days of protests and the barricading of roads by ...
News
3 years ago

Metro police officers could be seen on street corners with little sign of the protests that had earlier left streets littered with rubble.

Unrest has been simmering in the area since last week after a 45-year-old woman was killed in a shootout between three men. A 10-year-old girl was also wounded.

Residents vowed to shut down the area to mourn her death and called on government to deploy the army to clean up the drug-ridden area.

Scores of people have been injured in the ongoing violence.

Police fired rubber bullets at the protesting crowds‚ who have over the last few days littered the streets with burning tyres and debris.

Residents in Westbury have demanded that police minister Bheki Cele come to the area and speak to them as unrest continues.
News
3 years ago

More police have been deployed to Westbury on Monday morning where residents have taken to the streets to protest against drugs and gangsterism.
News
3 years ago

Police on the hunt for Westbury shooter

Gauteng police are still searching for a motorist who fired several rounds of live ammunition during an anti-crime protest in Westbury‚ Johannesburg.
News
3 years ago
Next Article