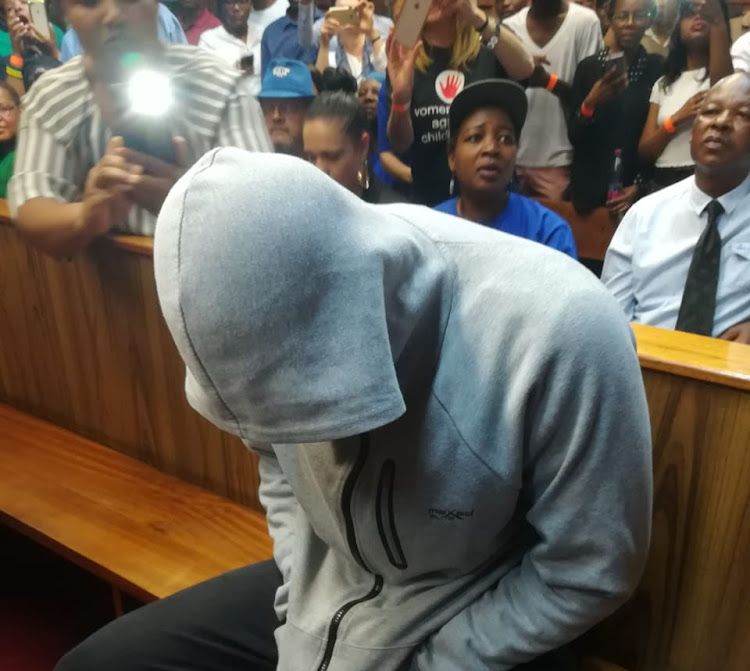 The man accused of raping a seven-year-old girl in a Dros restaurant bathroom appeared in the Pretoria Magistrate's Court on Tuesday.
Image: Nico Gous

The case of a man accused of raping a seven-year-old girl in a bathroom of a Pretoria restaurant was postponed on Tuesday for further investigation.

Advocate Sanet Jordaan asked for the postponement in order to bring an application to obtain the accused's cellphone for "forensic downloading".

The man, wearing a grey hoodie to obscure his face, did not apply for bail. He faces a charge of rape‚ possession of drugs‚ intimidation and assault with intent to cause grievous bodily harm.

Legal Aid attorney Rian du Plessis, who is representing the accused, also asked for a postponement. Du Plessis listed several injuries sustained by the man during his arrest. The accused was allegedly hit with open hands and belts by police officers at the Silverton police station, where he claims officers also kicked him and forced him to do push-ups.

The accused allegedly watched the little girl in the restaurant play area and later followed her to the bathroom. According to patrons‚ the mother of the child went looking for her after she noticed she was not in the play area. She allegedly caught her daughter's attacker in the act.

A video purportedly filmed moments after the rape ordeal depicted a naked man‚ partly covered in blood. The government has called on people not to share the “disturbing video”.

Different political parties, civic organisations and members of the society joined hands outside the court to protest against the rape of children and women in the country.

“You rape my child, I’ll kill you,” a placard reads where the alleged #DrosRapist is appearing. @TimesLIVE pic.twitter.com/B2Ajx1cW9y

The organisation #NotInMyName has also arrived for the #Dros case. They are joined by #BLF and #EFF supporters. @TimesLIVE pic.twitter.com/lS0p2q3nCL

Tshwane mayor Solly Msimango, who met with the family of the Dros restaurant victim, said they are “taking it very very hard”.

Msimango said he had met members of the family on Monday to offer support and to remind them that they are behind them.

Makhubela said there were several other cases of similar nature that went unreported.

“We need to liberate the victims so that victims start coming out. We are hoping that the courts and law enforcement agencies will start acting and take this seriously,” he said.

The EFF’s Tshwane region has joined the growing calls for the 20-year-old man accused of raping a child at a Dros restaurant to be denied bail.
News
3 years ago

The ANC Women's League in Gauteng wants bail to be denied to a man alleged to have raped a child in a Dros restaurant bathroom in Pretoria.
News
3 years ago
Next Article