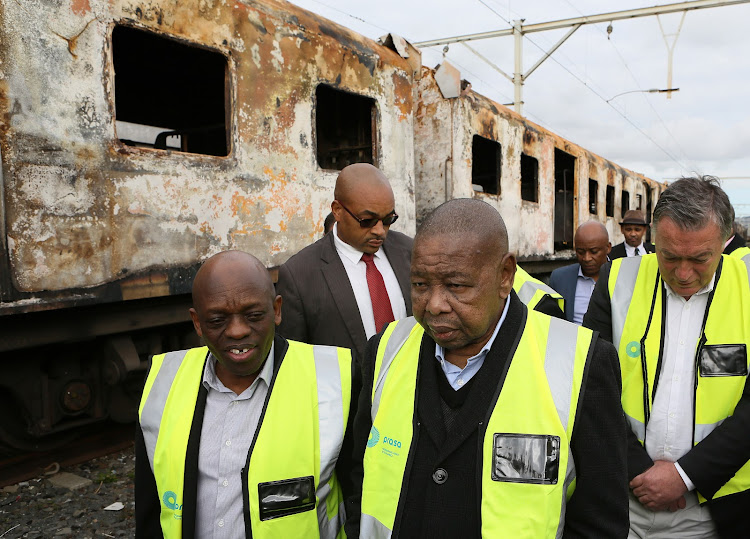 Transport Minister on a visit to the burnt trains in Cape Town.

For the past two weeks many commuters with monthly train tickets have had to use alternative transport due to the poor service of Metrorail in Cape Town. Trains are overcrowded and seldom on time. Some people say they have lost their jobs because they are always late for work.

On Tuesday in the late afternoon‚ GroundUp saw a young mother pass her 17-month-old-baby through the train window to people on the platform so that she was able to push her way through the overcrowded train to get off. Mary Kathembe‚ who waited almost two hours for a train at Parow station on Friday‚ told GroundUp that since the Cape Town fire the train service has got even worse. She said that her employer has moved her time to start work to 10am because she is so often late.

“On Wednesday‚ when I arrived at Cape Town station after work [to go home] around 6pm‚ there were lots of people … Some had been waiting since 5pm. The train was overcrowded and commuters who were waiting for the trains at Salt River and Woodstock failed to board. Those who wanted to get off couldn’t until people started to get off at Mutual‚” she said.

In a media statement on Thursday‚ the United National Transport Union (UNTU) said Metrorail is left with just 40 train sets. It needs 88 train sets. The union said it had asked Police Minister Bheki Cele to appoint a task team to investigative who is behind the ongoing arson attacks.

“The person or persons who are behind the arson attacks are taking bread out of the mouths of the families they have to feed‚” said UNTU.

On Friday‚ Minister of Transport Blade Nzimande visited the Paarden Eiland Depot where the burnt carriages were stationed. He was accompanied by provincial MEC for transport Donald Grant and mayoral committee member for transport Brett Herron.

Nzimande‚ addressing reporters‚ said he believed that there could be multiple motives for the arson incidents. “But at the same time‚ there are elements of serious organised crime. We are talking to the police now to establish whether there are any commercial benefits for the people who burn trains of whatever sort‚” said Nzimande.

“We have agreed that the existing task team responsible for investigating the arson attacks be expanded and it will involve everybody - national‚ security and intelligence networks. They must report back to us by the end of August. We have a transport imbizo in September and we want to listen to communities‚ their problems and what they think should be done‚” said Nzimande.

Grant said‚ “The biggest area that has been affected is the central line. We used to have 33 trains running before these incidents; at the moment we only have eight.

“Commuters need to understand that we need their help to identify the people committing these attacks. We cannot bring new trains here until there are facilities to service them and also to ensure that they will not be affected. We’ve got to get our house in order.”

Meanwhile Metrorail’s long-suffering commuters continue to struggle daily with the poor train service. A domestic worker who lives in Parow and works in Crawford‚ changes trains at Maitland. She said she waited for almost an hour on Thursday. Her employer now wants to extend her working hours because she is often late. “It’s is not my fault that the trains are not on time. I leave my house at 7am daily. I can’t also use a taxi because it would mean two taxis from Parow‚” she said.

She said her sister‚ also a domestic worker‚ had lost her job for being late.

Another woman‚ who commutes from Muldersvlei to Mowbray and changes at Salt River‚ said she that last week she had received a final warning for being late for work. She doesn’t know what to expect now.

GroundUp reporter Tariro Washinyira adds: “I had given up on the trains. But last week‚ I tried again. On Friday I waited for the train at Parow station from 8am to 9:25am. After work on Friday and this Monday the trains were so full I could not board and had to take taxis.

"On Tuesday last week and Thursday this week the train was so overcrowded I couldn’t get out at my home stop‚ Parow‚ and I ended up at Tygerberg station.” – GroundUp

If commuters thought Metrorail couldn’t get worse, it did this week
Next Article