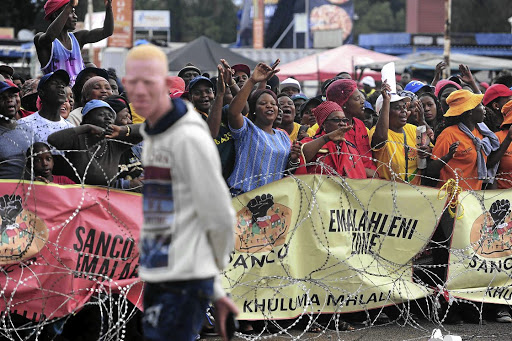 Angry residents outside a Witbank court wanted to set the court house on fire after another delay in the murder case of an albino girl.
Image: Thulani Mbele

Residents of Witbank expressed outrage on Tuesday after hearing the case against four men accused of abducting and killing an albino girl and her nephew was postponed yet again.

“Let’s burn this court!” the 150-strong crowed chanted as they gathered outside the Witbank Magistrate’s Court.

The four accused appeared via satellite from the Witbank Correctional Services Centre‚ where they have been kept since their arrest.

Tensions flared outside the court behind the rolls of police tape used to keep the crowds away from the building.

“The family has stayed with a cloud of death over them for seven months and‚ according to our customs‚ this is not done‚” Taylor Pookgoadi‚ the district secretary of the SA Communist Party in Nkangala told the crowd of supporters.

While‚ the family and scores of other supporters had arrived at the court hoping for the matter to commence‚ it became apparent that the matter was not quite ready for trial.

“It doesn’t seem like there will be much progress when we come back on October 10‚” Pookgoadi told the crowd. “We want the case to simply be moved to a bigger court.”

The case had been postponed after it was found that a fifth suspect was yet to be extradited from Swaziland‚ where he also faces other charges.

Also‚ the DNA results‚ which would determine if the body parts found in different locations were that of 13-year-old Gabisile Shabane‚ who had been mutilated‚ were yet to be obtained.

It is believed that the attackers who had stormed their home in January and had mistaken the light-skinned toddler for another albino child who was in the house. His remains were found dumped in a swamp near the N4 highway.

'They know where her mother lives' - Bail denied to trio linked to...

Trudy Xhala-Mavimbela‚ from the office of the mayor‚ said the family had found themselves in a tricky situation because not all of Gabisile’s body parts had been found.

“We can’t bury them until the suspects [hand over] the rest of the body parts‚” Xhala- Mavimbela said.

“This matter has been dragging on since January. Government needs to speed things up so that the family can find peace. This has been traumatic for the family‚” she added‚ addressing the crowds.

On Tuesday‚ two of the alleged killers bowed their heads‚ avoiding contact with the camera that showed their faces to the court. The third beamed his bright smile as he saw the crowds of people seated in the court gallery‚ while the fourth accused simply stared straight forward.

Gabisile’s sister‚ the mother of Nkosikhona‚ stared at the screen‚ glaring at the men accused of taking her son and her sister’s life.

After proceedings‚ she‚ her mother and other relatives who had packed the court stood outside‚ where they briefly spoke to the media.

They expressed concern at the delay in the case.

“We are not happy with how things are progressing‚” said Sibongile Shabane.

They expressed their displeasure at how abruptly court proceedings had ended as one of the accused had raised his hand‚ requesting to speak to his lawyer.

The lawyer stepped out of the courtroom to give his client‚ who was at the prison‚ a call.

The matter was temporarily adjourned but minutes later the lawyer returned and left the court‚ leaving the court orderlies to explain that‚ as previously stated‚ the matter had simply been postponed to October.

Meanwhile‚ a source close to the family spoke to the trauma that the family faced as they frequently went to the mortuary to check on the corpses of the children‚ adding that the body parts were wilting away in the ice.

The worst part‚ however‚ was that even as court proceedings were scheduled to continue in October‚ there was no guarantee that the DNA tests would be ready and the bodies would be released for the burial‚ he said.