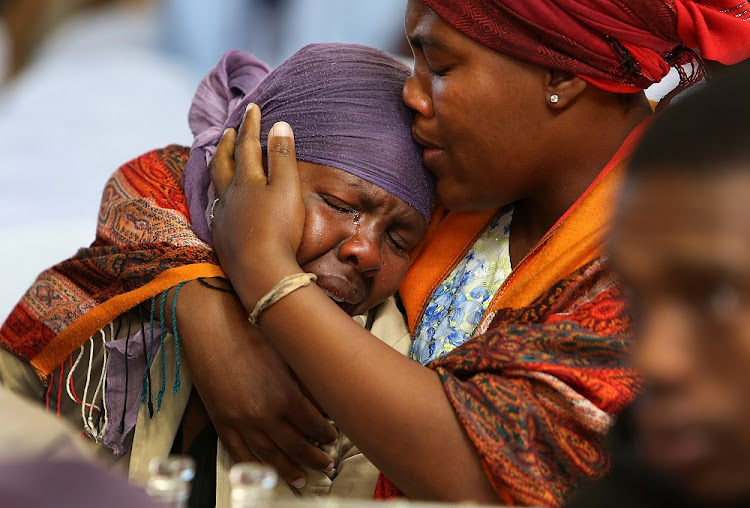 Dozens of mourners, on Thursday, gathered at the Rabie Ridge Community Hall for a memorial service of the twelve taxi operators who were killed in a brutal attack in KwaZulu-Natal (KZN) on Saturday.

The attack occurred along the R74 between Colenso and Weenen.

Eleven people died on the scene when a group of gunmen opened fire on a Toyota Quantum minibus they were travelling in while returning from colleague Nkosi Mthembu’s funeral in KwaZulu-Natal.

The president of the South African National Taxi Council, Phillip Taaibosch, warned on Thursday July 26 2018 against taxi operators constantly killing each other, saying that it would derail any progress made toward transformation. He was speaking at a memorial service of 12 taxi operators who were shot dead while returning from a funeral in KwaZulu-Natal. Subscribe to TimesLIVE here: https://www.youtube.com/user/TimesLive

The twelfth victim died on Tuesday from the injuries sustained during the attack.

Over 200 shots were fired at the vehicle.

Mthembu, who was a taxi owner and member of the Ivory Park Taxi Association, was shot and killed  along with brothers Sibongiseni and Bongani Mngoma on July 12.

It was a sombre and emotional service, where speakers from various taxi associations said they were left shocked by the brutal manner in which the twelve were killed.

Jabulani Ntshangase, an Alexandra Taxi Association executive member, said it was painful to see pictures of young men who were killed so brutally.

“We are in trouble. Our lives are in the hands of other people. Someone can decide to switch off our lights (kill us) at any moment. Please, keep us in your prayers because we are not safe,” Ntshangase said.

Dozens of mourners gathered at the Rabbie Ridge Community Hall, on Thursday, for a memorial service of the twelve taxi operators who were killed in a ...
News
4 years ago

He urged the association and its members not to retaliate and allow the law to take its course.

“Retaliation won’t solve the problem, it will just worsen the situation,” he said.

Family members and colleagues were emotional throughout the service.

Some of them struggled to hold back tears even though speakers attempted to console them.

Tebogo Jele, from the City of Johannesburg’s Transport Department, said taxi associations and authorities needed to work together to bring an end to the escalation of violence.

“We need to go back to the drawing board. These problems have been around for a long time and we need to do something about it. Our drivers cannot be killed in this manner. We have challenges about routes and revolving conflicts, but what are we doing as the government?” he said.

Jele said the onus did not lie solely with the authorities, but urged taxi associations to work together to end the violence in the industry.

The department of roads and transport has resolved to find an amicable solution with the industry bosses.
News
4 years ago

Ralph Jones, the South African National Taxi  Council’s Johannesburg chairman, said he heard of the killings on Saturday while driving back from Venda, Limpopo, where a member from the Alexandra Taxi Association was also shot and killed.

“We get criticism because the world is saying that we hide when things like these happen. We are being told that we are killers.

"Taxi people, we need to stop blaming the government for the killings. When will we start looking at ourselves so we can bring this to an end?” he asked.

He also told mourners that despite the arrests that were made in connection with the deaths, it would not bring back their members.

“Our leadership, including the government and police, need to intervene. We cannot be burying our members every weekend,” Jones said.

Meanwhile, police spokesman Brigadier Vish Naidoo, confirmed that arrests had been made in connection with the massacre but would not comment further.

“We can confirm that four men have been arrested. We can confirm one suspect is linked to the shooting but we are still questioning the other three,” Naidoo said.

Johannes Mkhonza has denied that his association was involved in the taxi violence over the Mall of Africa route.
News
4 years ago
Next Article