WATCH: Security guard survives after car crashes into him 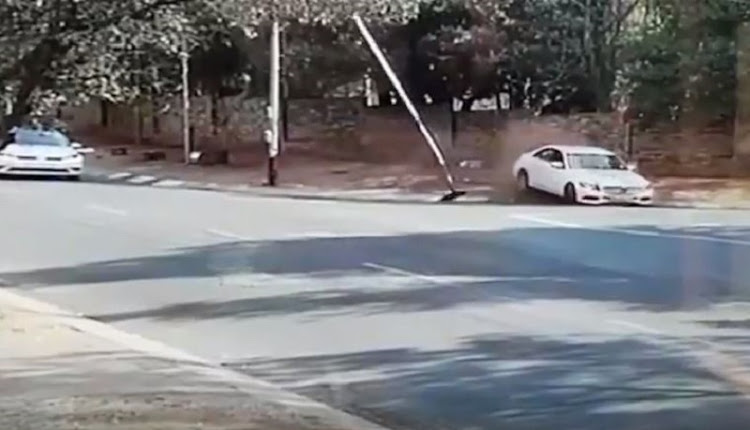 Security guard survives after car crashes into him.
Image: YouTube

A Johannesburg security guard who was deployed to be on the lookout for suspicious vehicles in the Morningside area is lucky to be alive after he was sent crashing into a wall by a car.

A video of the incident‚ captured on CCTV footage last week‚ has gone viral. In the video‚ the security guard is seen sitting on a chair near the roadside.

A white Mercedes Benz is suddenly seen speeding in his direction‚ narrowly missing two other vehicles before driving into him‚ sending him smashing against a brick wall behind him.

The vehicle swerves just moments before it hits the same wall but hits an electric pole‚ causing sparks to fly. It stops after finding its way back onto the roadside.

A Johannesburg Metro police officer has been arrested and suspended from active duty following his involvement in a three car pile-up while using the ...
News
3 years ago

Surprisingly‚ the security guard is able to make it back onto his feet after the severe strike. He is seen stumbling along as though in a daze‚ walking off the camera shot. Seconds later‚ the driver of the Merc slowly emerges out of the car‚ seemingly uninjured.

“He was working to identify suspicious vehicles entering the suburb of Morningside at the time‚” said spokesperson Adam Steyl in a statement.

“We can confirm that the individual concerned was injured‚ received excellent medical care‚ and has subsequently been discharged from hospital‚” Steyl added.

The police are investigating the incident.