Duduzane lives up to the Zuma court dramatics 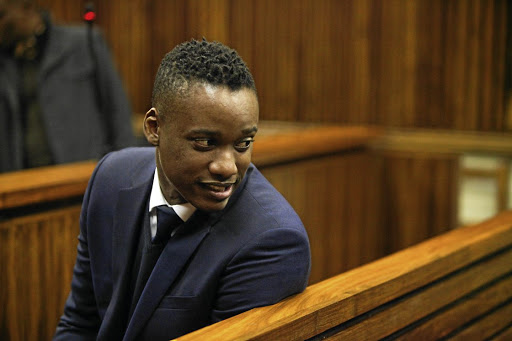 Duduzane Zuma's brief court appearances this week have been nothing short of drama and a spectacle.

From leg chains, a sense of style and fists fights outside court, the 34-year-old son of former president Jacob Zuma had social media and journalists enthralled.

His five-minute court appearance in the Randburg Magistrate's Court yesterday on two counts of culpable homicide following the deaths of two people during a 2014 car accident was no different.

Spotting a mohawk haircut, Duduzane arrived in a snazzy plain white shirt with a navy blue tie, jersey and suit.

He walked through a scrum of journalists inside courtroom 3, paying compliments to some over their dress sense.

He also wore a wry smile every time photographers clamoured to take his pictures.

Prosecutor Yusuf Baba told the court that Duduzane's matter was postponed until August 23 to allow his defence to peruse through the docket.

A scuffle broke out between BLF members and some journalists following Duduzane Zuma's brief appearance at the Randburg Magistrate's Court.
News
3 years ago

The state is arguing that his negligent driving resulted in the deaths of Phumzile Dube and Nanki Jeanette Mashaba, who sustained injuries and later died in hospital in 2014.

This after Duduzane had crashed his Porsche into a taxi on the M1 south off-ramp to Grayston Drive in Sandton, Johannesburg. Three other people were injured.

But Duduzane would not be drawn into commenting as journalists shoved microphones and cameras into his face as he walked out of court. 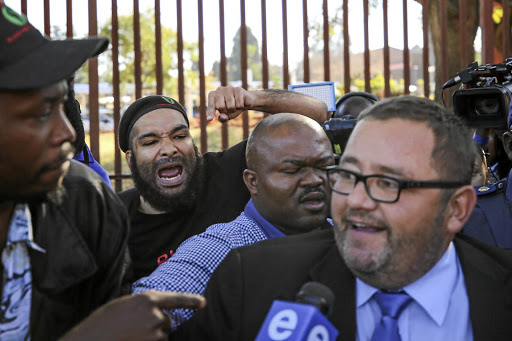 Several of his family members attended the proceedings. Among them were his elder brother Edward and his sister - TV personality Gugu.

So brief was Duduzane's court appearance yesterday that when his father arrived in court, he could not even step out of his presidential VIP protection vehicle as the matter had already been concluded.

But the usual drama - when the Zumas make court appearances - was only about to begin.

Outside, a scuffle ensued between AfriForum's Kallie Kriel and Black First Land First (BLF) members and some journalists.

On Monday, Duduzane was released on R100000 bail after being formally charged with corruption and alternatively conspiracy to commit corruption in the Johannesburg Specialised Commercial Crimes Court.

This was in connection with an alleged R600-million offer made to former deputy minister of finance Mcebisi Jonas in 2015 by Ajay Gupta, allegedly in Duduzane's presence. The country was thrown into a frenzy on Monday after images of Duduzane in leg cuffs surfaced.