This is just a warning shot‚ Numsa tells Eskom 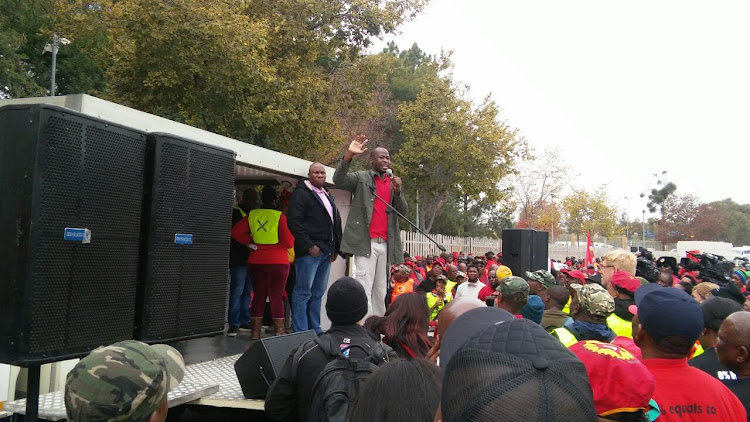 The president of the National Union of Metalworkers of South Africa‚ Andrew Chirwa‚ says Thursday's industrial action at Eskom operations across the country is just a warning of what is to come.

Members of Numsa‚ the National Union of Mineworkers and trade union Solidarity are protesting against a wage freeze.

Addressing protesters at a picket at Eskom's headquarters in Johannesburg‚ Chirwa criticised Eskom for telling workers it does not have money for a wage increase yet it is able to afford lawyers in an effort to secure a court interdict.

"If the negotiations fail‚ it is upon you to take action in your own hands."

He said the zero percent offered by Eskom to workers is an insult.

"This is a provocation of the highest note. If Eskom management thinks that workers at Eskom will continue to soldier on. . . they have something coming.

"This is the beginning. It is a warning bullet‚ not the end of the action.

"If they continue to undermine us by putting zero percent on the table‚ we will come back and ensure that there are no lights in the rest of the country‚" said Chirwa.

He accused Eskom of spending billions of rands in supporting independent power producers while the country has excess electricity.

He added the the new dawn championed by President Cyril Ramaphosa does not exist because workers are suffering more than before.

The unions are demanding a 15% wage increase.

"Workers will not be blamed for a crisis they did not create. This Eskom is poor today because they have squandered money. They have looted Eskom to an extent that it has no money. . . ‚" said Chirwa..