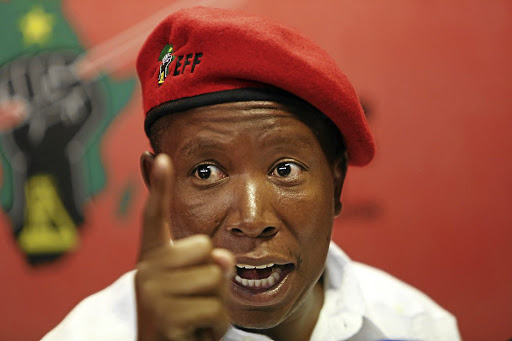 With former president Jacob Zuma now out of he way, the EFF looks set to change its approach in parliament by focusing more on championing economic transformation issues.

Since the party gained seats in the National Assembly in 2014, it focused much of its energy on forcing Zuma out of office over the Nkandla debacle and various corruption scandals.

But now with Zuma gone, the EFF like other opposition parties, is looking to re-position itself ahead of next year's general election by focusing voters attention to what it stands for.

Addressing journalists at a breakfast meeting yesterday, EFF leader Julius Malema said his party would, over the next few months, introduce a number of proposed legislations aimed at giving real meaning to radical economic transformation. These will include proposed amendments to existing laws that the EFF sees as hindering change and preventing the state from improving the lives of the poor.

Malema: Land expropriation includes the land under your bonded house

Economic Freedom Fighters leader Julius Malema says land expropriation without compensation will include land on which bonded houses have been built.
News
4 years ago

Malema said parliament had accepted an EFF-sponsored private members' bill that seeks to amend the Banks Act in order to make it permissible for the state to own a stake in commercial banking institutions.

He said the party was also forging ahead with its campaign for laws that would establish a sovereign wealth fund for the country as well as make tax avoidance a criminal offence. The EFF also wants a total ban on the advertising and promotion of alcohol.

Malema said they wanted the ban of alcohol advertising because: "Lots of men beat up their women when they are drunk. Dagga is illegal but there is no statistics that shows that dagga smokers are responsible for domestic violence.

"But yet there is a clear role that alcohol plays in society. Let's ban all alcohol adverts."

Malema said the government must employ all the security guards and cleaners who work at government building. "Stop outsourcing these services and having a middleman to pay our people. That will give more money to our people."

He said his party was preparing the ground for genuine economic emancipation and these were some of the laws that would prepare the ground.

If the ANC continues to lose support and requires help from the Economic Freedom Fighters to remain in power‚ it will face serious demands that ...
News
4 years ago

The Economic Freedom Fighters are planning a national shutdown to bring awareness to problems in the public health system.
News
4 years ago
Next Article