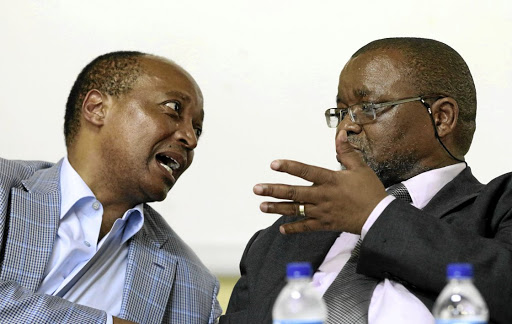 Mine owner Patrice Motsepe and Mineral Resources Minister Gwede Mantashe discuss a point during their visit to Modikwa mine in Burgersfort, Limpopo, where six workers were killed.
Image: ANTONIO MUCHAVE

Some of the survivors from the horror Modikwa mine bus attack in Burgersfort, Limpopo, had to break its windows to escape the raging fire that had engulfed it.

Yesterday, Joel Matsepane, 41, who sustained injuries to his head, shoulders and both arms, told Sowetan he was thankful to God for his life.

Matsepane, Herman Kgoete and Joseph Manyisa were among the survivors who were transported to the Netcare Pholoso Medi-Clinic in Polokwane to receive treatment.

Minister of Mineral Resources Gwede Mantashe described the horrific killing of six miners in a petrol bomb attack in Limpopo as a disaster and ...
News
3 years ago

"I realised that my life was in danger and had to think fast to get out. That's when I broke the window in order to get out of the bus," Matsepane said.

He said he did not understand why the villagers had vented their anger at them.

Kgoete, 54, who sustained injuries on the head, shoulder and hip, said: "The sounds of people screaming to get assistance is still ringing in my mind. The fire was too huge and I was forced to use my feet to kick the window in order to escape it."

Manyisa said: "I feel bad for the colleagues who lost their lives. May their souls rest in eternal peace."

Mantashe described the horrific killing of six miners as disaster and anarchy.

Speaking during the visit with various stakeholders, Mantashe said the suspects' intention with their petrol bomb attack was to kill all 50 mineworkers on the bus on Monday night.

"We call on the police to dig deeper in this case. We want to know who is the brain behind the attack and that person must be arrested," he said.

Police yesterday arrested five people in connection with the deadly petrol bomb attack on a bus.
News
3 years ago

Mantashe attributed the attack to growing unemployment, as well as greed, following the closure of up to five mines in the area known for platinum and chrome mining activity. It remains unclear though why ordinary workers were attacked.

"Some of these mines have been placed under care and maintenance, they are waiting for the price of platinum and chrome to increase [to] open them," Mantashe said, adding that perhaps some of the mines would need new operators in order to create jobs.

Motsepe also revealed that the shareholders wanted Modikwa Platinum Mine closed as it was not making money.

"There is no money here but we will continue because of our commitment to create and maintain jobs."

Section 21 chairman John Thokoane said the community at Driekop had been complaining about nepotism in the hiring of workers.