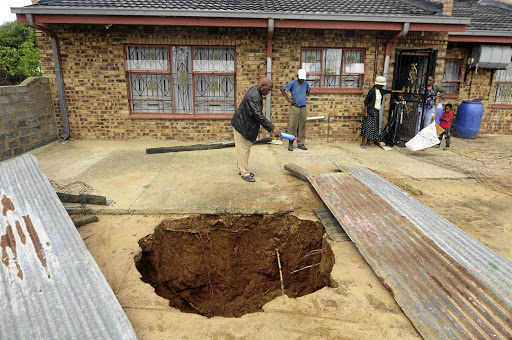 The Ngoako family are living with the danger of a sinkhole in their yard in Ngobi, North West. The sinkhole was discovered by five-year-old Otlotleng two weeks ago./Thulani Mbele

A gaping sinkhole growing wider and deeper by the day in the backyard of pensioner Dorah Ngoako is threatening the safety of her family.

The void started as a crack following heavy rains more than a week ago in Ngobi village in North West.

The sinkhole is about two metres from Ngoako's house and her family is struggling to sleep at night as it becomes evident the ground on which their house was built is unstable.

"It started really small, more like a crack on the ground, but as time went by it was clear that the ground was caving in.

"By the third day the hole was so big we had to cover it with corrugated iron sheets as a precaution," she said

The 68-year-old lives with her husband, Melato, 71, 36-year-old daughter and their three grandchildren aged between five and 13.

They have lived in the yard for over two decades but had never seen or heard of anything like this in the village.

"It is worrying because we do not know which part of the yard will cave in next . It means the ground on which we built our house is unstable and will bury us alive."

Ward councillor Lucky Letlhabe said he reported the sinkhole to the Moretele local municipality. "The technical team is looking into the matter for an urgent solution. The team will visit the family to further assess the situation and see what can be done to alleviate the family's plight," he said.

Letlhabe said the rains caused damage in the village but this was the only reported incident of a sinkhole.

The Gauteng government announced that it will cost taxpayers up to R50-million to repair a huge moving sinkhole in Laudium, Tshwane, which has resulted in the closure of parts of the R55 road and left two houses severely damaged.

According to the provincial government, 25% of Gauteng's land is dolomitic. Tshwane municipality spokesman Lindela Mashigo said the council was attending to 44 recorded sinkholes, varying in sizes.

"Sinkholes are mainly caused by leaking wet services such as water, sewer or stormwater and surface water ponding. A higher occurrence of sinkholes occur in periods of heavy rainfall."

"This may cause a cavity in the dolomite, which is covered by soil and if that soil wets up more than it can handle, that is when you get a sinkhole."