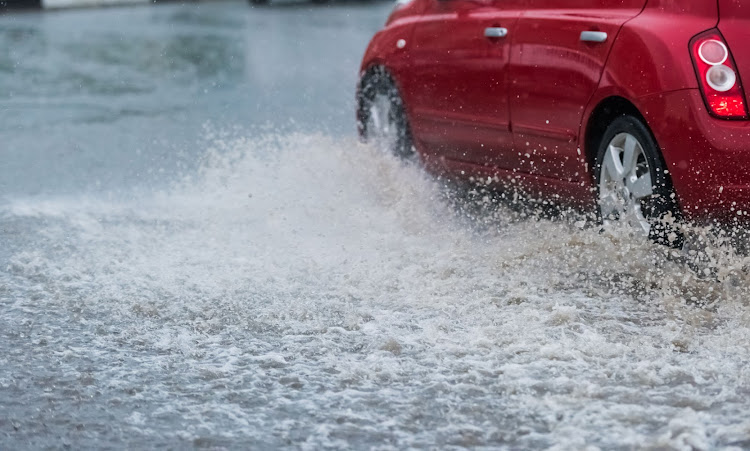 Generic image of a car driving through puddle of water.
Image: 123RF/Dmitry Bruskov

Heavy rains in Johannesburg have caused a massive sinkhole‚ knocked over trees and driven flood-hit residents out of their homes.

Rob Beezy tweeted a warning about a massive sinkhole in the road leading to Valhalla from the R55 in Gauteng.

Gauteng Weather tweeted a different view of a vehicle being swallowed.

😱 HEAVY RAIN causes BIG SINKHOLE in front of dump site near Valhalla on the road leading to and from the R55. Avoid area | 📸 @firstgroup_FRT pic.twitter.com/6iNq2tXmpo

The storms also resulted in trees falling over and severe traffic delays.

Johannesburg EMS spokesman Nana Radebe told eNCA that it had been a “hectic” night and several families from Diepsloot had to abandon their homes and spend the night at the local fire station.

The South African Weather Service had earlier in the week warned of localised flooding in Gauteng‚ KwaZulu-Natal and the Free State.

More rain is expected on Friday over Gauteng‚ the Free State‚ parts of the North West‚ Mpumalanga and Limpopo. Johannesburg will be cool with a maximum temperature of 19 degrees.

The City of Johannesburg said on Thursday night that roads all over the city had been affected as well as an informal settlement.