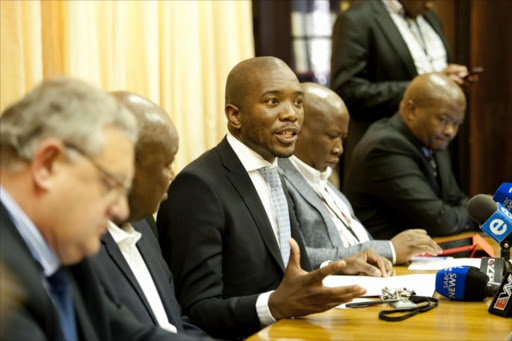 Opposition parties in Parliament have called for the motion of no confidence in President Jacob Zuma‚ scheduled for February 22‚ to be brought forward to this week.

The parties also resolved that following the motion‚ Parliament must be dissolved.

These are the decisions taken by leaders of the opposition political parties which met in Parliament on Monday.

The meeting of opposition political parties took place on the same day as the ANC held its special national executive committee meeting in Irene‚ Pretoria‚ to discuss the transition of leadership.

“The EFF tabled a motion of no confidence for the removal of the president. We are of the view that Mr Zuma has violated the constitution and naturally must be removed.

“That motion was scheduled initially for February 22 this year. The collective of leaders of opposition parties that are here feel that it is urgent and therefore natural that Parliament must convene urgently‚” Democratic Alliance leader Mmusi Maimane said.

He said the Economic Freedom Fighters had written to the Speaker of the National Assembly‚ Baleka Mbete‚ requesting that that there should be an urgent sitting this week.

“It is along with that that we are calling on all South Africans from all walks of life … must march in their numbers to insist that Jacob Zuma must be removed as a matter of urgency.”

Maimane said the opposition political parties were also requesting that the programming committee of Parliament meet urgently so that a sitting for the motion for the removal of Zuma can be scheduled.

“We say that on the basis of saying that it cannot be that we enter factional battles and seek to propose that we must support Cyril Ramaphosa or anybody from the ANC. It is the view of the collective that the ANC has been complicit in violating the Constitution‚ in defending criminality.”

He said to request of South Africans to sit back and insist that another person must come from the ANC would be undermining constitutionalism.

He said following the dissolution of Parliament‚ early elections should be held so that a new leader can be given a fresh mandate.

EFF leader Julius Malema said the motion of no confidence must take place this week.

Malema said Mbete had not responded to the EFF letter about bringing forward the motion of no confidence.

“By tomorrow 10 o’clock if Baleka has not responded‚ the EFF is going to launch an urgent application in court because we are in a crisis‚” Malema said.

EFF leader Julius Malema said the ANC was the problem, not Jacob Zuma. Opposition leaders met at parliament to discuss a possible dissolution of parliament.