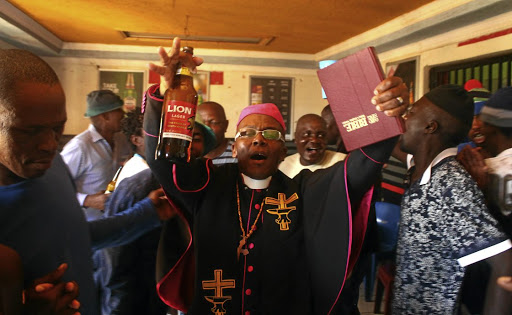 "Bishop" Tsietsi Makiti's Gabola Church is largely scorned but he claims it does not only focus on booze but also has social projects to uplift the community. / KABELO MOKOENA

"Bishop" Tsietsi Makiti is a man who divides opinion and has been met with a lot of scorn for delivering his sermons in taverns and shebeens.

Makiti is the founder of the controversial Gabola Church and some church leaders have described his baptising of people with alcohol as representing "the end times".

Gabola loosely translates to "have a sip".

Sowetan took a closer look at him and found he is a man who wears many hats.

He admitted to being fond of expensive whisky. In his community of Evaton in the Vaal he is somewhat a folk hero.

His home is the only double-storey house on his street and he drives a marked military health services vehicle because he is apparently also a nurse in the SA National Defence Force.

Some locals believe Makiti is "doing his community good through his work".

His church shot to fame after a video of him praying with patrons at a tavern in the Vaal went viral.

Dressed in a grey and maroon robe, with a black tippet and a purple cleric's shirt, Makiti met Sowetan at his home, a stone's throw from the Old Apostolic Church, where he had been a junior pastor for a decade.

He said he quit the church because he was disgruntled at the lack of opportunities.

A senior member at the same church told Sowetan that Makitihad been ordained as a junior pastor before he decided to quit two years ago.

"He wanted to rise up the ranks and assume a leadership role in the church but he felt that he was not presented with opportunities to do so.

"Two years ago he had a squabble with some of the church leaders and decided to leave," said the member.

"We don't take tithes from our congregants. The only tithe we have is in the form of congregants buying their own drinks while we conduct our services," he said.

The 53-year-old said one of the reasons he started Gabola church was because his application to be a chaplain in the army was rejected.

"I have been serving in the army since 1987 and in the '90s I applied to be a chaplain and I was inspired to open this church because I was not accepted as a chaplain even though I have the capabilities," he said.

Makiti said he founded his church four months after returning from an SANDF peacekeeping mission in the Democratic Republic of Congo.

"The church is not about alcohol only, we have programmes that empower the youth. We started soccer teams and a studio for artists and photographers."

'25k to dine with Major 1' - Bushiri slammed for charging congregants

The planned installation of the Shembe church leader was unexpectedly called off at the eleventh hour on Saturday.
News
3 years ago