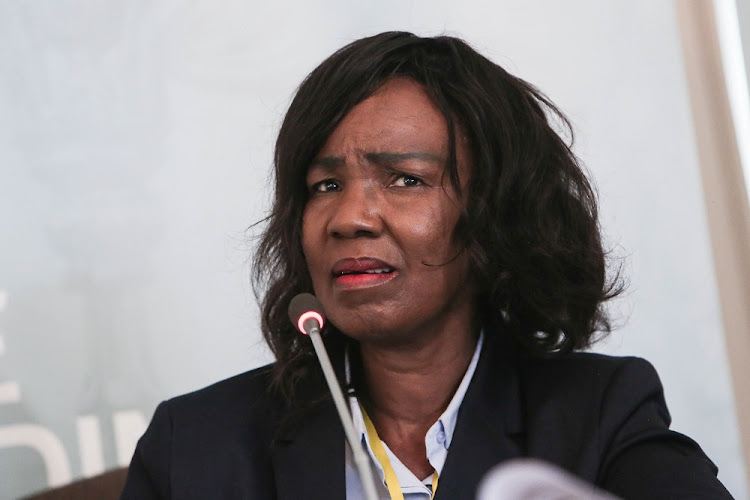 On her fourth day of examination in the hearings into the Life Esidimeni disaster‚ the official who led the project‚ Dr Makgabo Manamela‚ continued to say she was not responsible for the deaths.

Manamela‚ who is also a qualified psychiatric nurse‚ signed licences giving inexperienced‚ underfunded‚ poorly-equipped NGOs permission to look after profoundly mentally ill patients and as a result‚ 143 people died‚ most of them in NGOs.

NGOs were used to care for patients after the Gauteng Department of Health terminated the contract with Life Esidimeni‚ and about 1‚712 patients were moved out of Life Esidimeni homes.

Despite being told she was a “defensive” witness‚ Manamela admitted to Solidarity advocate Dirk Groenewald that the NGOs to which she gave authority did not comply with the legal requirements.

But Judge Dikgang Moseneke had to interpret her answer for her.

The judge said: “At last‚ we have an answer: the NGOs that you issued licences to did not comply with... most of the [legal] requirements.”

Many questions to Manamela went unanswered‚ and Moseneke frequently expressed confusion regarding her testimony.

“What are you saying now?” he asked at one point.

On another occasion‚ he said: “You are being defensive. A normal answer to such a crisp question is yes or no‚ so we can make progress – this is the fourth day of evidence.”

Advocate for Legal Aid Lilla Crouse asked Manamela what the Life Esidimeni closure was about‚ if it wasn’t about saving money.

A remorseless Makgabo Manamela‚ who led the Life Esidimeni project‚ continues to evade responsibility for why 143 patients died when moved from Life ...
News
4 years ago

On Friday‚ Crouse led evidence that a consultant report by Health Advanced Initiatives showed that the Life Esidimeni homes for the mentally ill amounted to “money well spent”.

The report‚ completed by May 2015 and costing more than R400‚000‚ revealed to the Gauteng health department that Esidimeni was a cost-effective project. Nevertheless‚ in September that year‚ the department ended the contract with Life Esidimeni.

Manamela gave no insight into why this was done.

Crouse said: “We have established the project wasn't about money. Why was it initiated?”

Crouse asked Manamela why‚ when the DA’s spokesperson on health‚ Jack Bloom‚ wrote a question asking about the quality of NGOs‚ Manamela didn’t tell the legislature that 67 people had died by August 2016.

Makgabo Manamela‚ one of the three officials behind the Life Esidimeni tragedy‚ returned to the stand on Thursday‚ thus avoiding an arrest warrant ...
News
4 years ago

She said she told her junior project managerm Levy Mosenogi‚ and Gauteng staff in meetings about the deaths. She said: “I reported it to the project manager. I reported it to channels: ‘People are starting to die.’” Crouse countered: “Even now‚ in November 2017‚ you are still not prepared to speak out about what happened. You are deflecting. You are denying. Your attitude is not bringing truth to this commission.”

Suspended director of mental health in Gauteng, Dr Makgabo Manamela must be the most incoherent person with a PhD.
Opinion
4 years ago

When Manamela didn’t answer questions‚ families of the deceased patients heckled her‚ shouting out phrases that she has often repeated‚ such as: “I partially agree.”

At other times‚ when she said she didn’t know‚ they shouted: “But you were the director!”

When she wouldn’t answer concisely‚ family members shouted “Yes or no? Yes or no?” One woman shouted: “Liar! Liar!”

Moseneke has had to ask families not to heckle Manamela at each of her appearances.

In response to Crouse saying‚ “If you had spoken out‚ people would not have died‚” Manamela replied: “I don’t know how to answer that question.”