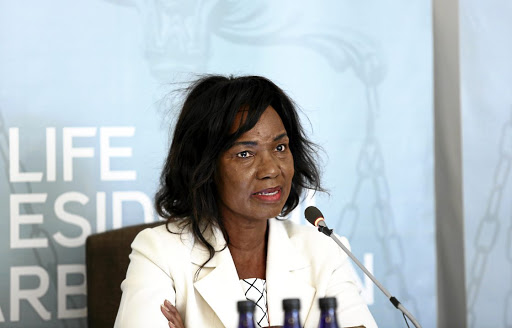 Suspended director of mental health in Gauteng, Dr Makgabo Manamela must be the most incoherent person with a PhD.

Testifying at the Life Esidimeni arbitration tribunal on Monday, Manamela frequently tripped on her own statements and adamantly refused to take responsibility for the tragedy that led to the deaths of 143 mentally ill patients.

In her defence, she testified that she informed former provincial health MEC Qedani Mahlangu that her department was not ready to move patients from Life Esidimeni to non-governmental organisations (NGOs).

She said it was Mahlangu who had issued instructions that patients be moved before the end of June 2015. Yet she still signed off on it, and the patients were transferred. A person with her qualifications and seniority is expected to make judgment calls in such situations, especially when people's lives are at stake.

Her decision to choose to bow to political pressure against her better judgment is very worrying, and paints a scary picture of the calibre of our civil servants.

Manamela, one of senior officials behind the Life Esidimeni tragedy, failed to explain her role and responsibility in the events that led to the deaths, even though she was found by the health ombudsman to have written invalid licences for the ill-equipped and inexperienced NGOs involved.

A warrant of arrest and a medical certificate were sought after suspended director of mental health services in Gauteng Dr Makgabo Manamela failed to ...
News
4 years ago

She first testified that all the NGOs were licensed and "had been inspected by a team" before she issued the paperwork.

However, she could not explain why some NGO licences had incorrect addresses on them and others listed places that didn't exist as their physical addresses.

Manamela, who has a PhD in psychiatric nursing, said she had met with patients' families before the move, and that she knew they did not want their loved ones to be moved, as the new facilities were "unable to look after them".

Two NGO owners have already testified that they were forced by Manamela to take patients that they couldn't accommodate.

Manamela rejected this testimony, saying it was not true.

Similarly, nobody has taken responsibility for the 2012 Marikana massacre either.

The impunity enjoyed by government officials regarding the injurious consequences of their actions is very disconcerting.