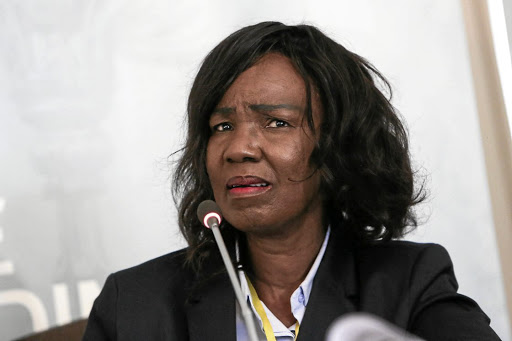 A remorseless Dr Makgabo Manamela, who led the Life Esidimeni project, continued to evade responsibility for the 143 patients who died when they were moved from the homes.

Manamela has tried to avoid testifying, ignored the first subpoena because of an error with the date, then asked for a postponement on the day she was to appear, then missed two days of testimony due to sudden sick leave.

Yesterday, facing arrest if she didn't testify, she still avoided responsibility by being what Section27 advocate Adila Hassim described as "evasive" on the stand.

Manamela's refusal to answer questions reached boiling point when she would not reveal what she earned while on suspension. She even said she didn't get payslips as she was on suspension.

The suspended Gauteng department of health director of mental health services has been paid her full R64000 salary since her suspension on February 15, but yesterday she refused to confirm this.

A remorseless Makgabo Manamela‚ who led the Life Esidimeni project‚ continues to evade responsibility for why 143 patients died when moved from Life ...
News
4 years ago

A warrant of arrest and a medical certificate were sought after suspended director of mental health services in Gauteng Dr Makgabo Manamela failed to ...
News
4 years ago

After struggling to get Manamela to reveal how much she earned, Hassim presented her with documents showing she had been paid R385269 between February and July.

"If that is what they wrote then it is the truth, I did not calculate the money," she said.

Retired deputy chief justice Dikgang Moseneke, who is heading the arbitration hearings, said he could not understand why Manamela refused to confirm what she earned because she was a public servant and her salary was public knowledge.

In another exchange, Moseneke asked her if it was her duty as mental health director to protect the lives of patients.

"Yes, but how many died [before] at Life Esidimeni and other hospitals? I am not being insensitive," she insisted.

Asked by Hassim if she agreed with the decision to terminate the Life Esidimeni contract, she said, "so so".

Later, after insistent questioning about ending the Life Esidimeni contract, she finally admitted to Moseneke: "Yes, I supported the decision."