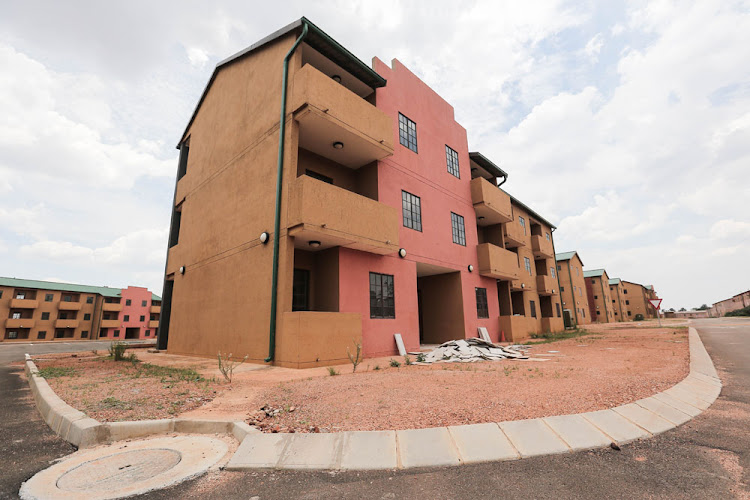 The new developments near the Sethokga Hostels in Tembisa in Ekurhuleni. The buildings that consist of over 220 units have been standing derelict since their completion two years ago.
Image: Alaister Russell

In September 2007‚ Ndumiso Mkhize* was moved together with more than 1 500 people from the old Sethokga Hostel in Tembisa to temporary containers to make way for new family units.

The group of hostel dwellers easily agreed and they were moved into hundreds of containers as temporary shelter while government built family units which they would later occupy.

The old structures were demolished and new family units built. Mkhize and many other hostel dwellers agreed because they were promised to move into new formalised housing system in two years.

Now it is has been a decade and Mkhize is still waiting to move into a new unit. Most of the family units have been completed and they are just separated by a fence from the old hostel. But these units have not been allocated to the people‚ about two years after they were completed.

“There were many containers like the one I am living in. I estimate that it was hundreds of them. But the nyaope boys came‚ stole some of them and others they vandalised. In the ones we live in‚ there is no electricity and water. We walk to the hostel to get those [services].

“In summer‚ these containers are extremely hot and in winter they are very cold. Let them open up our units. We are willing to pay. They should just open the new units and let us live there with our families‚” said Mkhize.

TimesLIVE visited the new units. They are beautiful - some with two bedrooms‚ living room‚ kitchen‚ shower‚ bathtub and toilet. The whole project is still well-protected with guards at the gate and beautiful streets clearly marked.

But the people it was aimed to benefit still live in terrible hostel conditions. In a reply to the Gauteng legislature‚ MEC of Human Settlements Paul Mashatile said 222 units were completed in the project and 18 are still outstanding. Money spent on the project stands at over R148-million.

Millions of rands of taxpayers’ money has been flushed down the drain.
News
4 years ago

The Gauteng department of human settlements has experienced similar problems in Diepkloof‚ Meadowlands and Dube hostels in Soweto. Housing units were completed but the people who were supposed to occupy them said they were expensive and said no one would benefit from projects meant for them. In other instances‚ housing units were vandalised.

Spokesperson for the department Keith Khoza admitted that Sethokga development was delayed for the same reasons.

“There were people who were staying in the hostel and they were relocated to containers as they are saying. The idea was to put them in those units but some of them said they cannot afford the rent. The dilemma that we are facing as a department is to make those units available to people who can afford them because the design and the specifications are above RDP. That was a stalemate.

“Those who could not afford it said 'you have moved us out of our space and now you want to put other people there‚ we won’t allow that to happen'. It is a similar case with all hostels.

“What the department has decided to do is to build RDP walk-ups for those who can’t afford [the new units]. They (hostel dwellers) have agreed that if the RDP walk-ups are built and they are allowed to move inside‚ other beneficiaries will also be able to move to the other units‚” Khoza said.

He added it was difficult for people paying rent of R100 at the hostel to afford the subsidised rental at the new units of between R750 for one bedroom to more than R1 000.

Khoza said land has already been acquired and there will also be demolishing of old structures to build the RDP walk-ups.

“The project has gone through the competitive bidding process. We are now at a stage where we will hand over the site to the contractor‚” he said.

*Not his real name