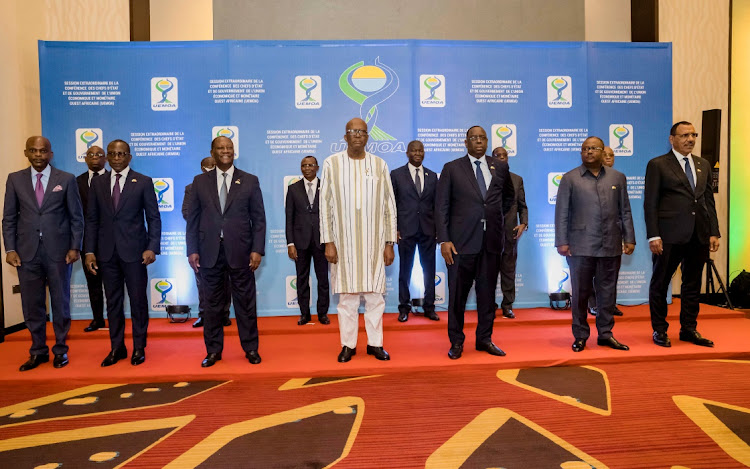 Leaders from the Economic Community of West African States (ECOWAS) pose during an extraordinary summit to discuss a proposal by transitional authorities in Mali to delay elections and return constitutional rule, in Accra, Ghana on January 9, 2022.
Image: Ange Servais Mahouena

West Africa's regional bloc said it has launched a 330 kilowatt interconnection line to supply electricity from Nigeria to Niger, Burkina Faso, Benin and Togo at a cost of $568mln.

Once the newly-launched project is completed, all 14 member countries of the Economic Community of west African States (ECOWAS) will be connected, which will jump start a regional electricity market, the group said in a statement.

Heads of states from Niger and Ghana attended an ECOWAS meeting in Niger on Thursday to launch the interconnection line, which will facilitate electricity trading in the region and extend power to Burkina Faso and Niger.

ECOWAS has said it plans to pool resources to establish an electricity market to end blackouts that have blighted its member states for decades.

The transmission project will be funded by the World Bank, the African Development Bank, the French Development Agency, the European Union with consideration from Nigeria, ECOWAS said, adding that construction work will be completed in 2024.

Africa's biggest economy, Nigeria, broke up its power generation and distribution monopoly almost 10-years ago in the hope that it would attract foreign investors.

But despite Nigeria's privatisation of the sector, the amount of power produced has stagnated at around half its total capacity.

Resurgence of unconstitutional change of governments in parts of Africa concerning: Ramaphosa

President Cyril Ramaphosa has told African leaders they should continue to support the efforts of Ecowas and the AU's Peace and Security Council in ...
News
3 months ago

The European Union imposed sanctions on Mali's transitional prime minister and members of interim president Assimi Goita's inner circle, after the ...
News
3 months ago
Next Article