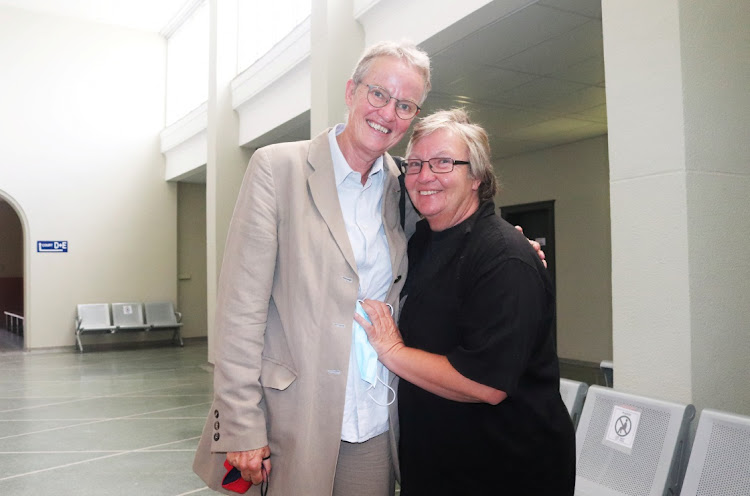 Namibian-born Anette Seiler-Lilles and German-born Anita Seiler-Lilles pose for a photograph ahead of Namibia's High Court ruling against two gay couples fighting for their marriages to be recognised under domestic law, in Windhoek, Namibia, on January 20, 2022.
Image: REUTERS/Sharon Kavhu

Namibia's High Court on Thursday ruled against two gay couples fighting for their marriages to be recognised under domestic law, with the judge saying that while she agreed with the couples' position, she was powerless to change the situation.

The ruling centered on the cases of partners Daniel Digashu and Johan Potgieter and a second couple, Anette Seiler-Lilles and Anita Seiler-Lilles. Digashu, a South African, and German-born Anita had applications for a work permit and permanent residency respectively denied based on their same-sex marital status.

Namibia's legal system does not recognise same-sex marriages and criminalises sexual conduct among non-heterosexual couples, though the law is seldom enforced. Both couples secured their legal partnerships outside of Namibia, where they now live together.

Same-sex relationships are illegal in many African countries from Algeria in the north to Eswatini in the south, and couples risk being jailed or openly scorned in public.

In court, they argued that the word “spouse” in Namibia's Immigration Control Act should include same-sex spouses, or, failing that, that the relevant section of the act should be declared unconstitutional.

Judge Hanelie Prinsloo said she agreed with these arguments but was bound by a previous over-20-year ruling by the Supreme Court, which said Namibia does not legally recognise same-sex relationships.

“Only the Supreme Court can correct itself,” she said, adding it was high time the Namibian constitution reflected that same-sex relationships are part and parcel of society.

Anette Seiler-Lilles said while the decision was disappointing, it also gave hope things could change, and that they would now discuss an appeal.

“It impacted us emotionally,” she said of the ordeal, adding that she and Anita, who have been partners for over 20 years and married for 18, felt they had been discriminated against.

“On the other hand, emotionally, it strengthened our relationship,” she said.

In a verdict hailed as a big win for gay couples in the country, in October Namibian Phillip Luhl and husband Guillermo Delgado won citizenship by descent for their son, Yona Luhl-Delgado, born to a surrogate in SA in 2019.

The couple had been fighting for citizenship for Yona and his younger twin sisters, who were refused documents required to enter Namibia after their birth in March 2021, with authorities arguing that Luhl must prove a genetic link to the children.

Namibia’s high court on Monday ruled against a gay couple battling to obtain travel documents for their twin daughters, born to a surrogate in SA, ...
News
1 year ago

Jenny and Narumi wept for happiness last week when a Japanese court ruled that barring same-sex marriages was unconstitutional, a decision that ...
News
1 year ago

ConCourt victory for life partners left out of wills

The ruling comes after Jane Bwanya, the fiancée and life partner of the late flamboyant 57-year-old Capetonian and multimillionaire Anthony Ruch, ...
News
4 months ago
Next Article