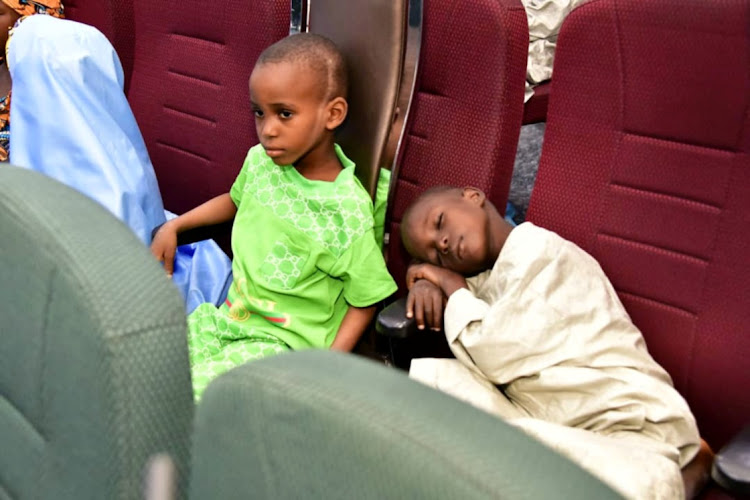 Students from Tegina's Salihu Tanko Islamic School who were abducted three months ago by gunmen, sit at the government house after their release, in Minna, Nigeria on August 27, 2021.
Image: STRINGER

Ninety children abducted from a school in Nigeria were reunited on Friday with their parents after being held captive for nearly three months, part of a wave of mass kidnappings by armed gangs that have spread fear across the north of the country.

"Today is the happiest and most joyful day for me and my family," said Ali Gimi, whose five children were among those kidnapped from an Islamic school in Niger state on May 30.

"We had lost our joy and happiness. This is like a dream, after I had started losing hope," he said. "As I am speaking to you, the whole of our family has gathered at my house to celebrate their safe return." 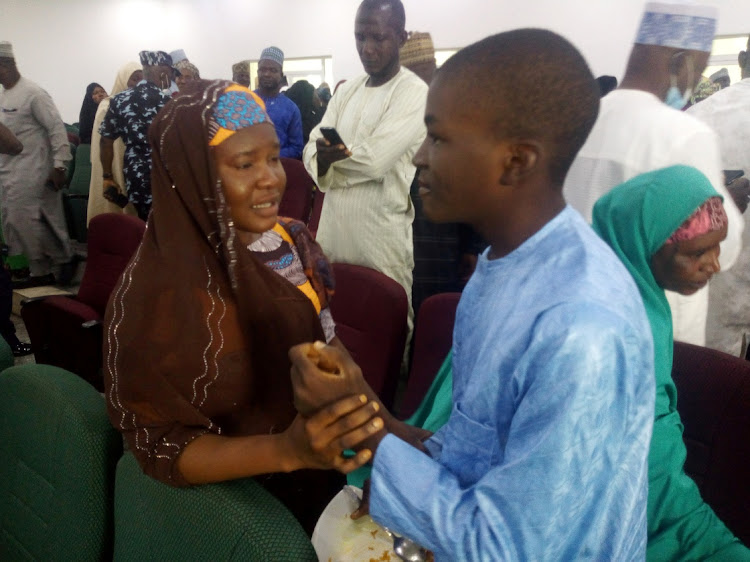 A mother reacts as she holds on to her son, one of the students from Tegina's Salihu Tanko Islamic School who were abducted three months ago by gunmen, at the government house after their release, in Minna, Nigeria on August 27, 2021.
Image: Stringer

Authorities say 136 children were initially seized at the school, though some later escaped. One, a five year old boy, died during captivity. The kidnappers had initially said six had died, but this proved to be a lie to scare parents into paying the ransom.

"We suffered terribly in their hands," one child, Ahmed Mohamed, told journalists. "They tied us up from morning till evening."

Mass kidnappings of schoolchildren, once a notorious tactic by Islamist militants to intimidate the population, have become a money-spinning industry for armed gangs demanding ransom payments. Authorities say 1,000 children have been abducted since December in northwestern Nigeria.

The 90 schoolchildren, along with two other abductees who were not identified, were released late on Thursday. Parents had sent a total of 65 million naira ($160,000) and six motorbikes as ransom, three parents told Reuters.

In a separate incident on Friday, kidnappers also released 15 students and four staff members who were taken earlier this month from an agricultural college in Zamfara state, a school source told Reuters.

The government has implored states not to pay ransoms, but desperate parents and communities often raise the funds themselves.

"We will do whatever it takes to bring them to justice," Niger state Governor Abubakar Sani Bello said of the kidnappers. "We have put in place all necessary measures to hunt down and prosecute those involved in this heinous act."

Armed gunmen kidnapped at least 75 people from a village in northwest Nigeria, residents said on Saturday, the latest in a slew of abductions that ...
News
8 months ago
Next Article