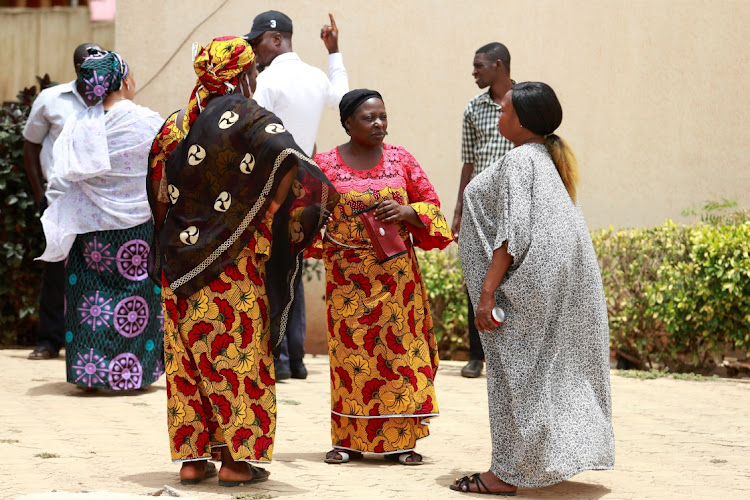 Parents of students from the Federal College of Forestry Mechanization who have been abducted speak after a meeting in Kaduna, Nigeria April 28, 2021. Picture taken April 28, 2021.
Image: AFOLABI SOTUNDE

When Linda Peter last spoke to her daughter, the brief phone call left her relieved the teenager was alive but distraught because she could not pay any ransom demanded.

Peter's 18-year-old daughter, Jennifer, was among 39 students abducted by gunmen on March 11 from a forestry college in the northwestern Nigerian state of Kaduna. The captors, who called from the teenager's phone, threatened to kill the male captives and force females into marriage, but did not specify the ransom sum sought.

"The government is not doing anything to help these children," said Peter, a widow and mother of five who sells vegetables for a living but has not worked since her daughter was taken. "We don't have anything," she said.

Kaduna Governor Nasir El-Rufai has repeatedly said his state government will not negotiate with "bandits", as the marauding criminal gangs are known, or pay ransoms.

Kidnapping for ransom has become an industry in restive northern Nigerian states where over 700 people have been abducted at education institutions since December. President Muhammadu Buhari in February told state governments that "rewarding" such crimes with money and vehicles, could "boomerang disastrously".

Peter, faced with the prospect of losing her daughter, said the government must do more to free the students.

"I'm angry with them," she said through tears of the Kaduna government, at a meeting of relatives whose loved ones were taken in the same raid.

"The governor will continue to work hard until banditry is contained, without succumbing to emotional blackmail and gradual politicization of the unfortunate situation," it said.

Much of the fear felt by Peter and other worried parents at the meeting, held on Wednesday, stems from the killing of five students who were among around 17 people kidnapped on April 21 from Greenfield University, elsewhere in the state.

Catherine Saleh, whose 29-year-old son Stephen Shuani was taken from the forestry college, said she too had received calls from the kidnappers, initially demanding 500 million naira ($1.31 million) – an unattainable sum for the teacher with a 100,000 naira monthly salary - before reducing that to 50 million.

"We cannot raise that money," she said. "If I had the money, I wouldn't send my child to that school."

The men purporting to be the captors told her to call government officials to demand they negotiate with them, but she does not know anyone to contact.

"These children are between life and death. They can shoot them at any time," Saleh said.

On the same day as the meeting, Dorathy Yohanna, one of the dead Greenfield students, was buried.

Her father, Yohanna Meck, said he hoped state officials would learn from the tragedy.

Police traced a suspect, who showed officers where Naadira Vanker had been buried.
News
8 months ago

One army officer and 10 soldiers were killed in Nigeria's Benue state in what a spokesman said was an unprovoked attack on Thursday.
News
9 months ago
Next Article