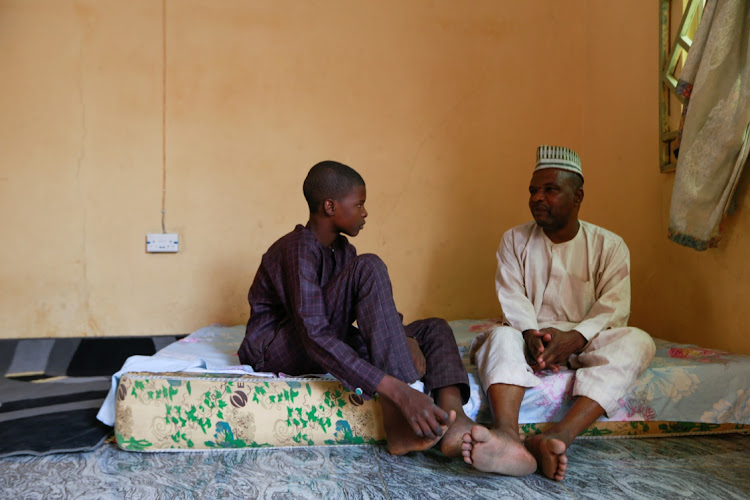 Balarabe Kagara speaks with one of his sons as the family awaits news of the release of two of his daughters after bandits kidnapped them from the JSS Jangebe school, in Zamfara, Nigeria February 28, 2021.
Image: REUTERS/Afolabi Sotunde/ File photo

Gunmen have released girls who were kidnapped from a boarding school in the northwest Nigerian state of Zamfara, the governor said in a tweet on Tuesday.

An armed gang abducted 317 girls from the Government Girls Science Secondary (GGSS) School in the town of Jangebe at around 1 a.m. on Friday.

"Alhamdulillah! It gladdens my heart to announce the release of the abducted students of GGSS Jangebe from captivity", Zamfara State Governor Bello Matawalle said on Twitter.

"This follows the scaling of several hurdles laid against our efforts. I enjoin all well-meaning Nigerians to rejoice with us as our daughters are now safe," he said.

The governor's tweets did not state the number of girls that had been released. The messages included images of girls and small buses.

Schools have become targets for mass kidnappings for ransom in northern Nigeria by armed groups.

Such kidnappings in Nigeria were first carried out by jihadist group Boko Haram, and later its offshoot Islamic State West Africa Province, but the tactic has now been adopted by other criminal gangs.

The raid in Zamfara state was the second such kidnapping in little over a week in the northwest, a region increasingly targeted by criminal gangs. On Saturday, gunmen released 27 teenage boys who were kidnapped from their school on February 17 in the north-central state of Niger.

Gunmen in Nigeria on Saturday released 27 teenage boys who were kidnapped from their school last week in the north-central state of Niger, while ...
News
10 months ago
Next Article