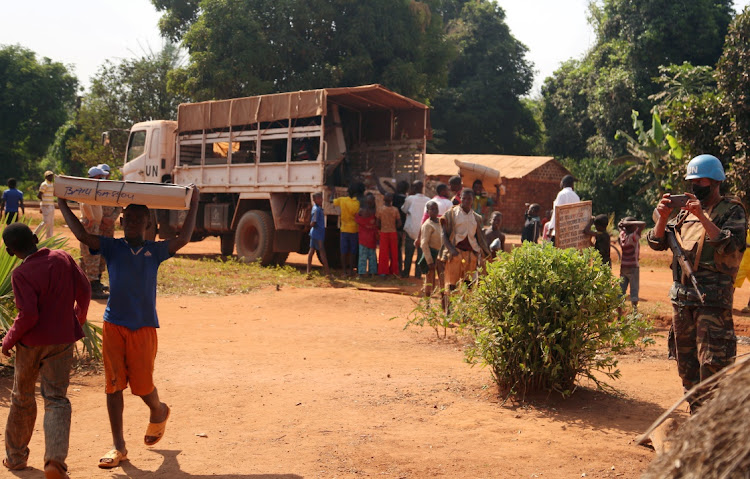 Three United Nations peacekeepers were killed in Central African Republic, the U.N. mission there said on Saturday, as the government and its allies tried to fend off a rebel offensive ahead of Sunday's presidential and legislative elections.

The Burundian peacekeepers were killed on Friday by unidentified assailants in Dekoa, about 200 km (125 miles) north of the capital Bangui, according to the U.N. mission, known as MINUSCA. Two more were injured, it said.

Peacekeepers were also attacked by unknown assailants in Bakouma in the southwest of the country, MINUSCA added.

Central African Republic, which is rich in diamonds, timber and gold, has experienced five coups and numerous rebellions since independence from France in 1960. It has been gripped by insecurity since former President Francois Bozize was ousted by a rebellion in 2013.

President Faustin-Archange Touadera is seeking a second term governing the country of five million on Sunday. On Saturday, the constitutional court denied opposition requests to delay the elections, ensuring they will go ahead as planned.

The court rejected Bozize's presidential candidacy earlier this month, saying he did not satisfy the "good morality" requirement because of an arrest warrant and U.N. sanctions against him for allegedly ordering assassinations, torture and other crimes when he was president.

I smail Dicky says he is afraid of political tensions and violence ahead of Sunday's general election in Central African Republic.
News
1 year ago

The United Nations also accuses him of collaborating with a coalition of militias to prevent the elections from going ahead.

Bozize has denied ordering or committing crimes when he was president while his party, the main opposition, has denied the U.N. allegation, saying they have no links to militia or rebels.

Reuters has not been able to reach Bozize for comment.

Attacks by rebel groups opposed to Touadera surged after the court rejected Bozize's candidacy. They briefly seized the country's fourth-largest city this week before being pushed back.

Underscoring the fragility of the security situation, the army's chief of staff said on Friday that a number of soldiers had deserted and told them to immediately rejoin their units.

President Touadera's international security partners, including Russia, France and Rwanda, have responded to the violence by sending troops and equipment.

Three hundred Rwandan peacekeepers arrived from South Sudan on Thursday, MINUSCA said, while two Russian military helicopters were offloaded from a cargo plane at Bangui airport on Friday, according to photos and government sources.

The prosecutor of the ICC on Friday said she would seek a full investigation into possible war crimes and crimes against humanity allegedly committed ...
News
1 year ago

Over the past few days, the media has been dominated by headlines that “Gordhan failed to produce evidence on state capture”. Some commentators have ...
Opinion
1 year ago

Axed soldiers continue fight to get jobs back

A group of more than 40 soldiers who were unlawfully dismissed by the SA National Defence Force (SANDF) in 2015 have taken their fight for their ...
News
1 year ago
Next Article