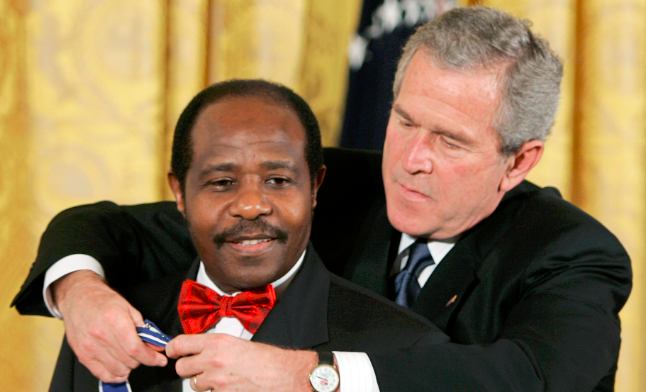 Paul Rusesabagina, depicted as a hero in a Hollywood movie about Rwanda's 1994 genocide and now on trial for terrorism, was denied bail on Thursday though he had promised not to escape.

Rusesabagina, who once called for armed resistance to the government in a YouTube video, was charged in a Kigali court on Monday with 13 counts including terrorism, complicity in murder and involvement with an irregular armed group.

The 66-year-old former hotel manager was portrayed in the Oscar-nominated film "Hotel Rwanda" using his connections with the Hutu elite to protect Tutsis fleeing the slaughter.

Rusesabagina, a Belgian citizen who had been residing in the United States, cited ill health in his application, vowing not to try to escape from Rwanda during the trial where he may face up to life imprisonment if convicted..

He said he would appeal the ruling.

His trial and the mysterious circumstances surrounding his appearance in Rwanda after years in exile are shining a spotlight on political opposition to President Paul Kagame.

Rusesabagina's family in the United States accuse Kagame's government of kidnapping him from Dubai, where he was on a trip, a claim that officials in Kigali reject.

Kagame has ruled Rwanda since the end of the genocide and won the last elections - in 2017 - with nearly 99% of the vote. Though credited with bringing stability and economic growth, Kagame's foes say he has become increasingly autocratic.

The family of Paul Rusesabagina - hailed a hero in a Hollywood movie about Rwanda's 1994 genocide - have accused authorities in Kigali of kidnapping ...
News
1 year ago

Rwanda said on Monday it had detained Paul Rusesabagina - the man who was hailed a hero in a Hollywood movie about the country's 1994 genocide - on ...
News
1 year ago
Next Article