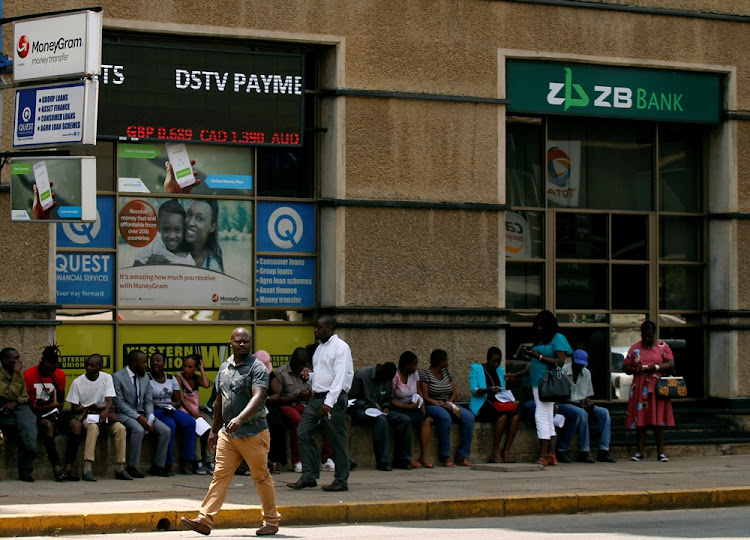 Zimbabweans queue outside a bank in Harare, Zimbabwe on February 25 2019.
Image: REUTERS/Philimon Bulawayo

Zimbabwe's new currency will be backed up with fiscal discipline, Finance Minister Mthuli Ncube said on Monday, adding that the government would allow the RTGS dollar to fluctuate but would manage excessive volatility.

Ncube spoke to Reuters as the central bank drip-fed dollars to a handful of commercial banks to allocate to large businesses, part of efforts to ease a cash crunch that has starved the country of many basic goods.

He said investors should not worry about the government ramping up issuance of Treasury bills, as it had done in the past. "That tap is closed for now," Ncube said.

Economists and business executives worry that if Zimbabwe does not curtail its borrowing, it could fuel inflation and a black market for dollars, making a foreign currency interbank market the central bank launched last week redundant.

Zimbabwe recently adopted a new currency, called the real-time gross settlement (RTGS) dollar. But how will this new currency really affect ordinary Zimbabweans - and will it help the country's struggling economy? Business Time reporter, Mudiwa Gavaza gives us the breakdown.

The central bank has been selling dollars to banks at a rate of one U.S. dollar to 2.5 RTGS, a level which bankers have criticised as too low but which Ncube said was appropriate for now, calling it an "initial trigger point".

He declined to disclose where Zimbabwe got credit lines to launch the RTGS currency, or the size of those credit lines.

"Actually we can't tell you how deep our pockets are or how shallow they are. If markets believe you have too much money they can bet by saying we are going to make money out of these guys," he said.

Ordinary Zimbabweans are not yet able to use the RTGS dollars in their bank accounts to buy dollars from banks, and the bond notes -- which many businesses are reluctant to accept -- are still in circulation.

But big firms are happy that they have been promised greater access to foreign currency for critical imports.

"The devaluation was long overdue. The economy has been in limbo and the RTGS can now play a role in boosting competitiveness," said Anthony Mandiwanza, chief executive of Zimbabwean food and dairy firm Dairibord.

The European Union on Monday resolved not to extend sanctions against any individuals in the Zim government.
News
2 years ago

"What is critical is that the government lives within its means and narrows and eliminates the fiscal deficit."

The last time Zimbabwe had its own currency, a decade ago, then-President Robert Mugabe's government turned on the printing presses to fund higher salaries for government workers and curry favour with the military -- with disastrous economic results.

Mugabe's successor Emmerson Mnangagwa has promised a break with the past, but many Zimbabweans are wary after his government ramped up borrowing ahead of a national election last July and inflation rose to a 10-year high in January.

Mnangagwa, who replaced Mugabe after an army coup in November 2017, hopes to steer the economy back to credibility and lure foreign investors, who have also been deterred by violent security crackdowns on post-election protests last year and demonstrations last month against a steep fuel price hike.

But the new RTGS currency has been dogged by criticism that the level of 2.5 RTGS per U.S. dollar is too strong for the Zimbabwean unit.

A dealer at a bank which operates on Zimbabwe's interbank market said launching the RTGS at 3 to the dollar or higher would have been better to encourage U.S. dollar sellers.

"There are a lot of (dollar) buyers ... but no sellers because the rate is not high enough," the dealer said. "The interbank system will ultimately become redundant if the Reserve Bank doesn't allow the currency to freely trade."

There are also indications the central bank is not selling many dollars. Only around $5 million changed hands on Friday, a senior central bank official told The Standard newspaper.

A Standard Chartered bank teller in Harare said her branch was not selling dollars to individuals yet, and downtown bank queues were no longer than normal.

On Monday, one U.S. dollar was being sold on the black market for four electronic dollars -- those locked in individuals' accounts for months due to the chronic cash shortages -- compared to 4.2 on Friday, currency traders said.

"The big players are holding onto their money, that is what is holding rates at the moment," one currency trader at Harare's Eastgate shopping centre said.