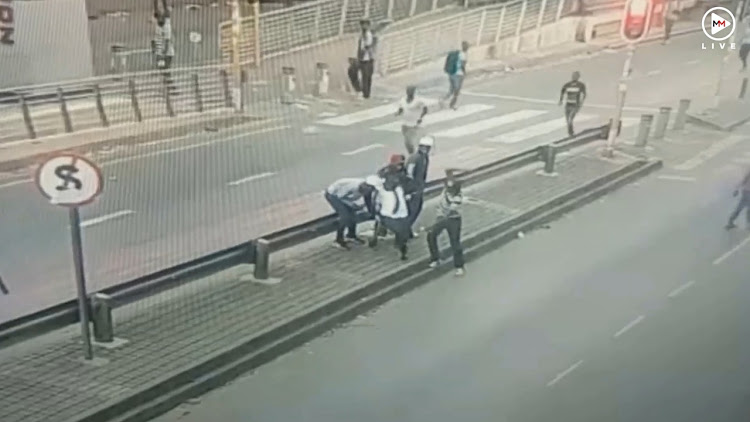 A still of the footage of schoolboy who was strangled and robbed in Hillbrow, Johannesburg.
Image: CCTV footage

Police are searching for a group of men who beat, strangled and robbed a schoolboy in broad daylight as passers-by went about their business in Hillbrow, Johannesburg.

In the video, a group of thugs grab the boy, who is wearing a school uniform, from behind and drag him to the ground. He is repeatedly hit on the abdomen with an unknown object.

They rifle through his pockets and walk away. The boy lies helplessly on the ground. At least a dozen people nearby carry on with their business as if nothing happened.

Police spokesperson Sgt Mduduzi Zondo confirmed the incident happened on Thursday morning on the corner of Bok and Twist in Hillbrow.

"They mugged him and hit him with an unknown object. We could not trace the victim, but according to the eyewitness the boy got up went in the direction of the MTN taxi rank."

Zondo said police could not confirm what was stolen from the victim.

"We are still looking for him to come forward and open a case."

Zondo said police believed that it was the same group of suspects that were involved in a spate of robberies in the area.

He said on February 9 two men were arrested and several stolen items were recovered.

Police have arrested two men in connection with the murder of two security guards who were shot dead in plain view of bystanders and motorists while ...
News
2 years ago
Next Article