BMW driver in lucky escape after rock bounces off sunroof 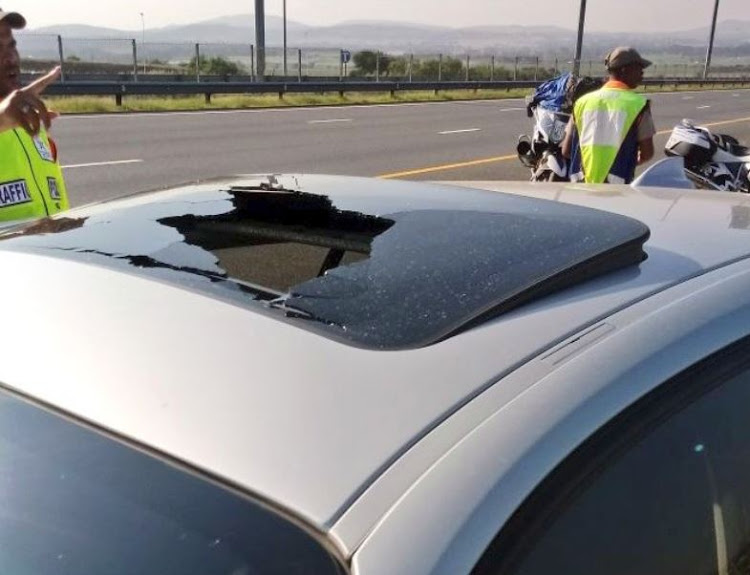 The motorist was unharmed.

After the rock bounced off her car‚ she continued driving - only stopping minutes later when she saw a traffic officer on a motorbike.

She then pulled over and reported the incident.

Mamonyane said city and provincial traffic officials were still on the scene late on Friday morning.

She said the incident occurred in the same vicinity where protesters from Freedom Park had thrown rocks onto the N12 on Wednesday. The residents were apparently protesting about a lack of electricity.

No one is known to have be injured from these attacks‚ she said.

"Traffic officers are trying to do the best they can [ to monitor the area] If people carry on doing this‚ an arrest will hopefully be imminent."

This is the latest in a string of stone-throwing incidents recently.

GTP Traffstats @GTP_Traffstats called for fences or walls to be installed along potential risk areas near highways and advised motorists to exercise caution.

"Slow down‚ keep left in areas like notorious N12 to allow reaction time and opportunity to steer away out of danger area."

Two truck drivers were injured near Lanseria north west of Johannesburg on Wednesday after a crash following a stone-throwing incident while a reward of more than R250‚000 is on offer for information leading to the arrest of rock-throwers in KwaZulu-Natal.

@gpdrt @GP_CommSafety @GautengProvince Despite Law enforcement presence along the N12 yet another opportunistic criminal stone throwing incident from the embankment +-07:30am Fri 2018011 next to Freedom Park, btwn Golden Highway and N1
Fortunately No injuries #Fence/WallsNeeded pic.twitter.com/WevfjtkjGK