Mashaba shocked by findings during blitz in Yeoville 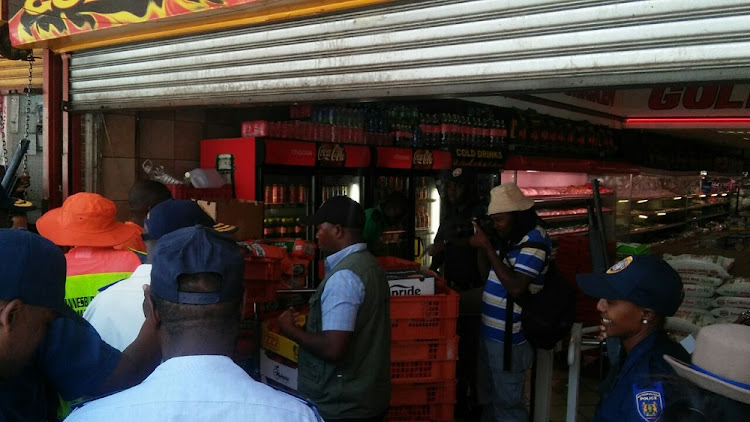 Joburg mayor Herman Mashaba ,in orange hat, shuts down a butchery in Yeoville for illegal electricity connection and failure to comply with health and safety standards.
Image: Penwell Dlamini

Johannesburg mayor Herman Mashaba and his team of city officials received a reality check on Monday when they discovered just how far some property owners are prepared to go to avoid paying for city services.

Mashaba conducted a blitz in Yeoville‚ next to the City Centre where he was targeting businesses that owed the city and were refusing to pay.

At his first stop at a flat on Rocky Street‚ Mashaba was led to a pillar box in the parking lot of a building that the city had recently disconnected from the grid and welded closed so that nobody could open it again.

But the officials‚ who included members of the city’s group forensic department‚ City Power‚ legal department and the Johannesburg Metro Police Department‚ were stunned to discover that the board had been opened‚ the electricity reconnected and the box then rewelded.

Technicians were immediately ordered to open the box and disconnect the electricity supply.

The team then moved to a business across the road – Golden Hyper Meat – which the city said was illegally connected to electricity.

A man has been arrested and the shops he was operating closed down in Yeoville‚ Johannesburg‚ on Monday during Mayor Herman Mashaba's blitz on errant ...
News
3 years ago

The man in charge at the butchery spoke to Mashaba himself‚ arguing that he had paid his bills. Officials from various departments sought to verify the his claim and found that he had allegedly reconnected electricity in his businesses without making any payments. Furthermore‚ the butchery had been closed by the city after its health and safety inspectors found that it did not meet certain requirements.

The man was immediately arrested in the presence of his lawyer who had come to rescue him from the embarrassment. By this time‚ Rocky Street had come to a standstill. SAP members and JMPD officers blocked both sides of the road in order to conduct the raid.

With the new police chief David Tembe leading the blitz‚ another business‚ a hardware shop‚ belonging to the same man was shut down by the city as it was also illegally connected.

The raid then moved to Becker Street‚ to a building called Park Court.

When the officials got into the building they could not find an owner and they went to check the status of the power supply as the building had been recently disconnected.

But they were stunned to find out that a new electricity meter which City Power is yet to introduce to the market had been installed in the building.

“It is one of our own who has done this. There is no way these people could have had access to this meter‚” Mashaba remarked in disbelief.

Across the road was a house with almost a similar problem. A new landlord introduced himself to the mayor. City officials alerted Mashaba that the property owed the city about R415‚000. The man begged Mashaba for leniency‚ committing to settle the debt if an arrangement was made. According to city records‚ he had been paying just R300 a month while charging the tenants R1‚500.

He was also immediately arrested. There were other arrests made by the city on the day in its effort to recover just under R1-billion in arrears which it says it is owed by over 2‚000 businesses.

“We will do everything possible to collect the maximum. This is not a one-day event…It is part of a bigger plan…This is going to be a daily occurrence in the City of Johannesburg until such time that we have effectively dealt with criminality in the city‚” Mashaba explained to reporters.