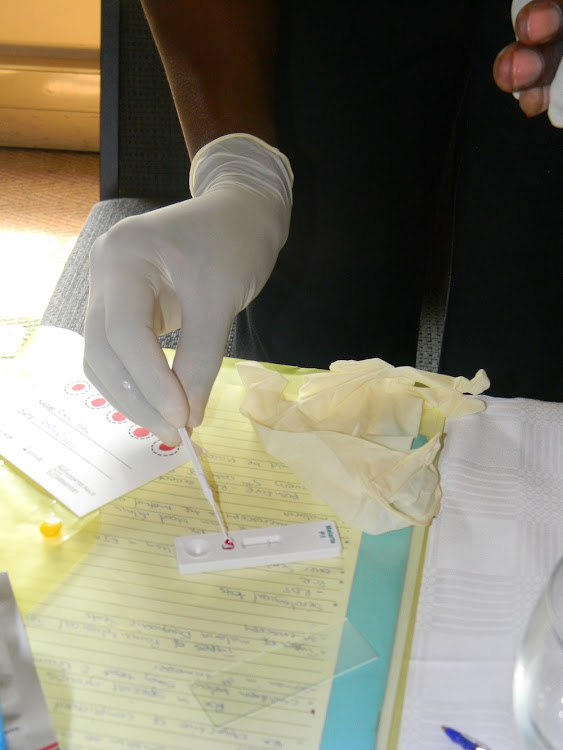 Rapid test kits like this show if a patient has malaria in a matter of minutes.

Malaria is preventable and costs less than a cup of tea to treat. Yet South Africa continues to battle with a high incidence of the disease.

This is according to anti-malaria campaigner Sherwin Charles‚ who together with veteran singer and humanitarian Yvonne Chaka Chaka‚ are local ambassadors for the Malaria Must Die global campaign‚ set to be launched on social media platforms by David Beckham on Wednesday.

" No one should die of malaria‚ yet hundreds of thousands of people - globally - a year still do. The disease is totally preventable and costs less than a cup of tea to treat."

Every two minutes a child dies from malaria and progress on ending the disease is stalling. We have to act now. Help us get the attention of world leaders by watching and sharing this message from David Beckham. Thank you. http://www.malariamustdie.com ► BE PART OF IT Be a part of the generation that ends malaria for good! Facebook - http://facebook.com/malariamustdie Twitter - http://twitter.com/malariamustdie Instagram - http://instagram.com/malariamustdie

The awareness campaign is expected to be a build up to Malaria Summit: London in April.

Malaria is a life-threatening disease caused by parasites that are transmitted to people through the bites of infected mosquitoes. Symptoms‚ which appear five to ten days after being bitten‚ include fever‚ headache‚ chills and vomiting.

“No one should die of malaria‚ yet hundreds of thousands of people - globally - a year still do. The disease is totally preventable and costs less than a cup of tea to treat.

“Ending malaria is within reach. But it requires governments to work together and renew their financial commitments to fighting the disease‚” said Charles.

In South Africa‚ malaria is mainly prevalent in Limpopo‚ Mpumalanga and KwaZulu-Natal‚ according to a 2017 Communicable Diseases communique.

Factors contributing to the high incidence‚ according to the communique‚ include "a rise in ambient temperature‚ rainfall and humidity reported over the season and a reduction of indoor residual spraying where malaria cases had declined in recent seasons".

“Currently we’ve had more 20 000 cases of malaria‚ and more than 300 died‚ during the transmission season in 2017‚” said Charles‚ who is also the co-founder of Goodbye Malaria.

“South Africa has made significant progress in the fight against malaria. However in the last transmission season‚ we’ve seen an outbreak in malaria‚ especially in Limpopo and Mpumalanga. There’s also a prevalence in northern KZN which is along the border of Mozambique.

“With Gauteng being a transport hub‚ there are cases of malaria being reported there as well.”

Charles said that nobody should be dying of malaria.

“It is totally preventable and curable and a lot of countries have been eradicating this disease‚ the latest being Sri Lanka.

“Imagine what a wonderful story we could tell if we had zero prevalence of malaria in South Africa‚ it would boost of tourism.”

Chaka Chaka added: "Very few people hear about malaria and who regard it as a non-problem in South Africa‚ that's why people get caught up. When people start communicating and get educated about malaria‚ then we're taking a step in the right direction. A person should know that if they have travelled to malaria hotspots like Mpumalanga and Limpopo‚ and they feel sick‚ they should consult a doctor."

She does not believe there is enough education in South Africa about malaria.

"Even when there's an outbreak‚ we're caught out with our pants down. I availed myself when there was an outbreak in Limpopo to tell people we are not killing you‚ we are killing the mosquitoes with residual indoor spraying."

On celebrity involvement in the malaria campaign Chaka Chaka said: "It's a reality that there are people who influence us to do things. If David Beckham gives his time to talk about this campaign‚ people will look and want to listen. I think it’s a great thing that he wants to conscientise people."

"Too many people are dying‚ the numbers must go down‚" she said.

Malaria on the rise in Limpopo and Mpumalanga

High numbers of malaria cases are being reported in parts of Limpopo and Mpumalanga.
News
4 years ago